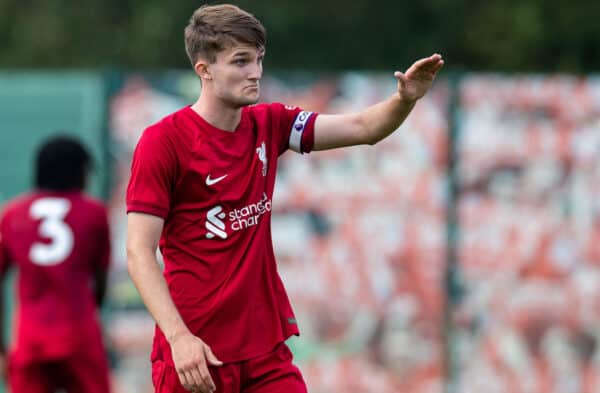 Marc Bridge-Wilkinson’s Liverpool under-18s suffered a narrow defeat away at Man United on Saturday, with the Reds reduced to 10 men during the second half.

Trent Kone-Doherty was among those to return to the starting lineup at Carrington, having recovered from a recent injury.

Liverpool started well and had a number of opportunities to take the lead in the early stages. United’s opener came largely against the run of play, with James Scanlon putting the hosts in front after a quarter of an hour.

Their lead lasted only five minutes, with 15-year-old Egyptian Kareem Ahmed, who continues to make a name for himself at U18s level, winning a penalty, which captain Terence Miles converted.

Both sides had opportunities to go in front before the break, with Kone-Doherty going close twice, but the scores remained level at half-time.

United had chances to go ahead early in the second period, and the game turned on its head on the hour mark, when Reds defender Calum Scanlon was sent off after picking up two yellow cards in quick succession.

The home side made the most of their numerical advantage, with Manni Norkett putting them ahead shortly afterwards, before full-back Jayce Fitzgerald made it 3-1 with a spectacular 35-yard strike.

Josh Davidson and Tommy Pilling had chances to reduce the deficit for Liverpool, and they did manage to pull one back in stoppage time, when substitute Ranel Young weaved his way through the United backline before firing home.

Bridge-Wilkinson’s side continued to push, but were unable to find an equaliser. The defeat leaves them sixth in the U18 Premier League table, with United in third.