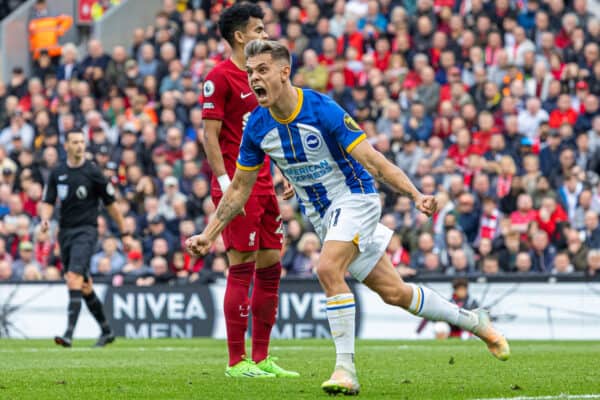 Brighton without hat-trick hero Leandro Trossard vs. Liverpool due to poor attitude

Leandro Trossard, Brighton‘s hat-trick hero from the 3-3 draw with Liverpool earlier in the season, will not be up for selection on Saturday, manager Roberto De Zerbi has confirmed.

Trossard scored after just four minutes at Anfield back in October and completed his hat-trick by the 83rd minute, securing a 3-3 draw in De Zerbi’s first game in charge.

Since then, the Belgian has scored twice and made 10 appearances but has now fallen out of favour due to his attitude.

“Leandro isn’t in the list of players for tomorrow. Leandro knows my opinion,” De Zerbi said in his pre-match press conference on Friday.

“The last session before the Middlesbrough game [FA Cup], he understood he didn’t play and he left the session without saying anything, it’s not good.

“I spoke with him and explained this attitude and behaviour I don’t like.

? Roberto De Zerbi reveals Leandro Trossard left a training session without saying anything in a very honest answer about his strained relationship with the player pic.twitter.com/2UCEqtfuPo

“He knows if he wants to play with Brighton, with me, he has to work hard, he has to run and he has to be in the right way.”

The 28-year-old has been the subject of transfer speculation throughout the month with Tottenham, Chelsea, Newcastle and Arsenal all mooted to have interest in his services.

Meanwhile, the return of Alexis Mac Allister to the XI could see ex-Red Adam Lallana move to the bench for what is Brighton‘s first home game of 2023.

As for Liverpool, Jurgen Klopp will remain without Roberto Firmino, who is “not close” to a return, while Darwin Nunez is a doubt for an issue not considered to be “major.”

James Milner and Stefan Bajcetic, meanwhile, are fit and up for selection.