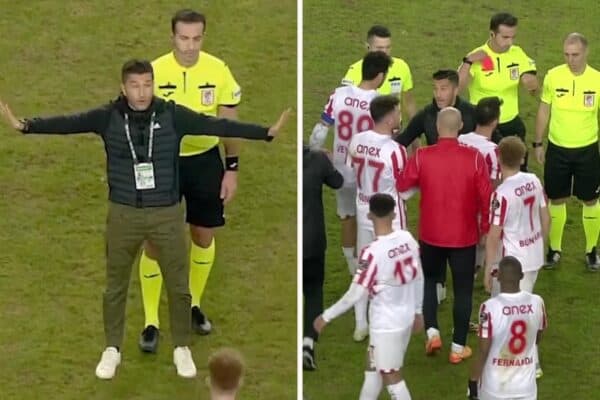 Ex-Liverpool midfielder turned manager shields referee from his own players

Ex-Liverpool loanee Nuri Sahin is now manager of Turkish side Antalyaspor, who were embroiled in a controversial night involving referee Kadir Saglam.

Though Sahin only spent five months on loan with Liverpool in 2012/13, he is remembered as one of the club’s most misused players in the modern era.

Arriving from Real Madrid as a high-profile signing, the German-born Turk was deployed in an unfamiliar No. 10 role by Brendan Rodgers, despite having shone as a deep-lying midfielder at Dortmund.

“I spoke with him and asked him why I was playing there. It is not my real position,” he explained upon his early exit in 2013.

“The boss could not answer me…”

Sahin then returned to Dortmund, where he was reunited with Jurgen Klopp, going on to further spells with Werder Bremen and Antalyaspor before announcing his retirement at just 33.

That came after being installed as head coach at Antalyaspor, where he is currently in his second season in charge.

Tuesday night brought a controversial clash with Fenerbahce, which saw Sahin’s relegation candidates take an early lead through Haji Wright only to fall to a 2-1 defeat with Michy Batshuayi’s brace.

Incredible scenes unfolded in Antalya as Fernando scored a stunning goal from outside the box in the eighth minute of stoppage time.

The linesman flagged for offside, with a VAR check ruling the strike out at the finest of margins as Wright was adjudged to have infringed.

Jeers rained down on the referee, Saglam, and his officials at full-time, with Sahin forced to run onto the pitch and shield them from his own players.

Winger Guray Vural in particular was incensed by the decision, while Saglam showed a red card to one of Sahin’s coaches as the Fenerbahce squad celebrated in the background.

Remarkably, that wasn’t the end of it, with Antalyaspor releasing an official statement afterwards blasting Saglam as a “novice referee” and demanding audio recordings from VAR.

Signed off by Antalyaspor’s board of directors, the statement accused Saglam of having “made up a penalty” in a 2-0 defeat to Kasimpasa in September before claiming he “sought the penalty and made up the offside” on Tuesday.

“We demand justice not only for our community, but for all Anatolian clubs,” it concluded.

Sahin has so far taken charge of 53 games with Antalyaspor, bringing 25 wins, 10 draws and 18 defeats.