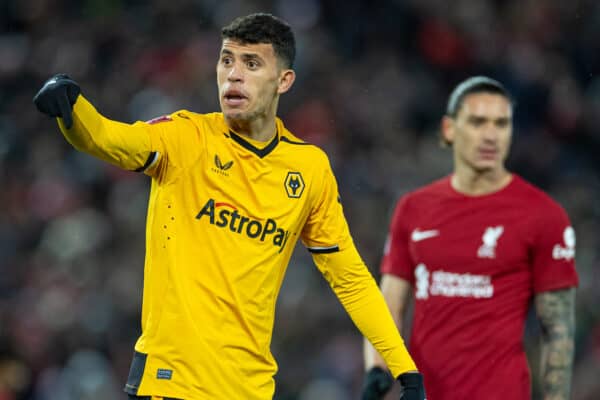 Liverpool target Matheus Nunes may have only played 27 minutes at Anfield, but it was enough time to leave an impression on a night where the Reds’ midfield was, again, in the spotlight.

It is expected that a deal for Nunes will be agreed ahead of the summer window, with a fee in the region of £44 million to get the move over the line.

There is growing clamour for an addition in January but the 24-year-old is not eligible for a winter move having already played for two clubs this season – Sporting CP and Wolves.

But Reds got a closer look at what he could soon offer after he was introduced in the 63rd minute at Anfield – namely, control.

In 27 minutes, Nunes made three successful tackles, completed three dribbles and won six of his seven ground duels, helping his side assert themselves as they pushed for the winner.

In stark comparison, Fabinho and Jordan Henderson combined for one tackle, two ground duels won and zero successful dribbles in 68 minutes together – and the stats were not hard to overlook.

Matheus Nunes in 33 minutes vs. Liverpool:

Brought control to the midfield. ?? pic.twitter.com/26BAblTz52

Matheus Nunes had better stats in 33 minutes than Henderson and Fabinho together.

But we still don’t need a midfielder ?

Matheus Nunes completed more take-ons than any other player on the pitch (3) and as many as the entire Liverpool team COMBINED.

He only played 27 minutes. ? pic.twitter.com/RGnQYv7plU

After watching Wolves slice through Liverpool’s midfield, like many others have this season, Nunes showed the qualities he offers in an impressive performance off the bench.

Strong in the challenge and ready to push forward, Liverpool fans were left impressed with what they saw but couldn’t quite help questioning why the club have waited to act:

Matheus Nunes played like he knows what's happening/what could happen in the summer. Very impressive.

Nunes was on for 33 mins. Best midfielder on show tonight. That's where we currently reside.

Matheus Nunes’ technical security & defensive work are both excellent. Nice impact off the bench at Anfield. Lopetegui just needs to continue using him in a double pivot rather than as an advanced 8 (which Lage & Davis both did). It’s the role that perfectly suits his strengths.

Matheus Nunes ran the match after coming on, made our midfield look like a bunch of MLS soccer players quite a few times.

Another unconvincing evening. Matheus Nunes however was gliding at Anfield. If things continue ticking along nicely in the background, that could become a regular occurrence.

After the match, Klopp lamented that his side “didn’t win enough challenges” and that Wolves “win a challenge and all of a sudden we are completely open.”

It’s the story of the season so far and with a replay later this month and a league fixture with Wolves to rearrange, we could be seeing a lot more of what we are missing in midfield and what Nunes has to offer.