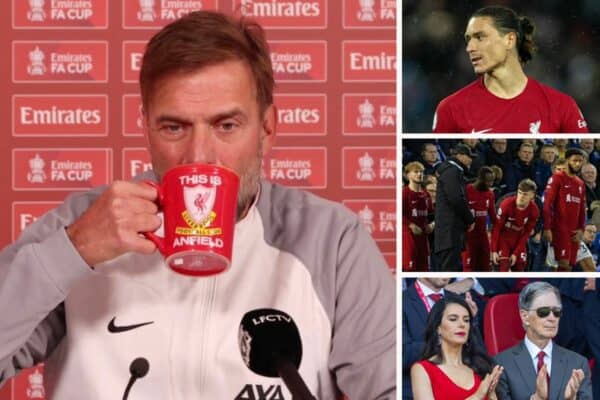 Speaking ahead of Liverpool’s FA Cup third round replay at Wolves, Jurgen Klopp had an update on the fitness of Darwin Nunez and remained coy on takeover speculation.

Having missed Saturday’s defeat at Brighton, it sounds as if the trip to Molineux will come too soon for Nunez, but Klopp did say he was “very close” to a return.

James Milner and Stefan Bajcetic are both available having resumed training in recent days.

“Darwin is very close, but it’s Monday and the game is tomorrow, but he’s very close,” Klopp told reporters.

“Milly and Stefan trained fully. Milly was on the bench (at Brighton) and Stefan is available again. That’s it.”

“Yes, we will make changes”

Klopp named a full strength team in the first clash against Wolves earlier this month, but with the replay coming just three days after the defeat at Brighton, and four days before another league clash against Chelsea, rotation is on the cards.

“Not all players who played the last game are available now, for different reasons,” he explained.

“Yes, we will make changes, that’s clear. But it’s good as well.

More formation tweaks on the cards?

The boss took full responsibility after selecting a team and formation that simply did not function against Brighton.

Thiago was deployed in a more advanced role, with the idea being that Liverpool would be more solid, but that certainly wasn’t the case.

Klopp has implied, though, that more “solutions” will need to be found while Cody Gakpo and Mo Salah are Liverpool’s only fit, senior forward options.

“We have a lot of things to consider,” he said.

“We have two senior strikers available, all the rest are midfielders, so how can you set that up?

With social media speculation (nothing more) suggesting that Liverpool could be nearing a takeover, Klopp was asked whether he had been in discussions with Fenway Sports Group regarding a possible sale.

The answer was a very coy “yes,” and not a lot more!

“Yes, but nothing for you actually!

“What could I tell you about that? Nothing.”