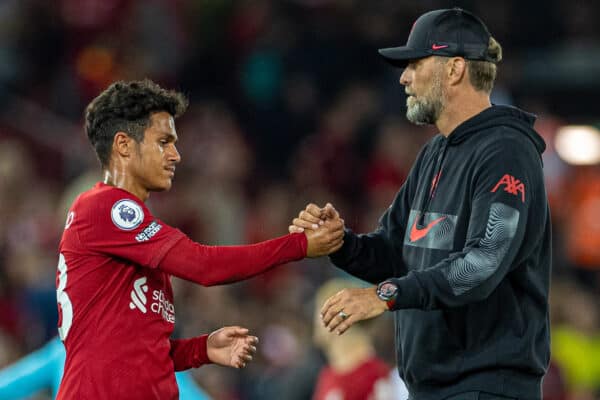 Jurgen Klopp has stressed there is nothing “personal” behind omitting Fabio Carvalho for the past five games, insisting “everything is good.”

Carvalho was a highly anticipated arrival at Anfield following his breakout season with Fulham, but it has been a stop-start campaign so far.

Used regularly in the early months – albeit often from the bench – the 20-year-old scored in consecutive Premier League games including a stunning last-minute winner against Newcastle in August.

His next goal for the club came in the Carabao Cup defeat to Man City on December 22, but he was then withdrawn at half-time in that game and has not featured since.

Asked for an explanation for Carvalho going five games now as an unused substitute, Klopp insisted that it was not a “personal” issue.

“There are no, from my point of view, personal situations or stuff like this,” he told reporters.

“We are a football team, players offer and I have to pick. That’s pretty much everything. There’s nothing else.

“He’s behaving well, everything is good, didn’t have any problems or whatever. It’s just sports decisions that you make for the moment.

“But we are working, he is working. That’s all.”

Carvalho could finally come into the side for the FA Cup third-round replay at Wolves on Tuesday night, with Klopp admitting the need for “fresh legs” and with options scarce in the final third.

There is no guarantee, of course, but the No. 28 is a viable candidate along with those who started the 3-0 loss at Brighton on Saturday.

That humiliation at the Amex has led to question marks over the strength of the squad, not least in their mentality, but Klopp is adamant that there are no fractures developing.

“It’s always the question. What is there first: team spirit or success? I am 100 percent it is always the spirit first,” he said.

“Maybe there are some examples where it was different – I was never involved in them.

“All these things happen. It’s clear.

“Thank god nothing like that happens outside of the dressing room. That would be probably really bad if then all of a sudden we had to explain these kinds of things.

“So far we are at least good with that. But we are very clear with ourselves. We don’t hide, neither information nor ourselves.

“So that’s it, but we have to admit too often this season we didn’t play to our potential. That’s the truth as well.”