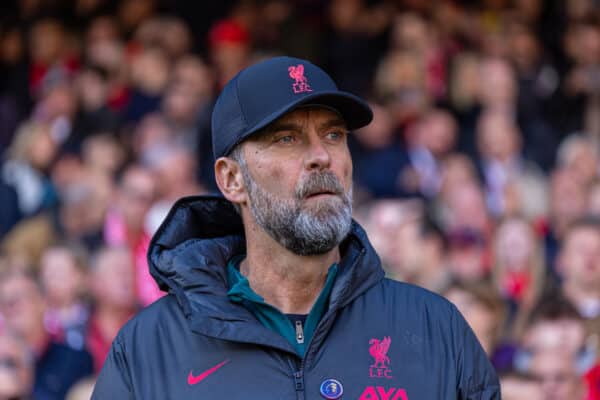 Jurgen Klopp insists Liverpool are not “stubborn” in their view of the transfer market, but suggested room would need to be made for any new arrivals.

The Reds have already brought in Cody Gakpo during the January window, but there are mounting calls for at least one more signing in the midfield.

If not, it is a growing belief that Liverpool will fall desperately short of their targets for the season – and potentially face missing out on key signings if they fail to qualify for the Champions League.

But it has been maintained that no further additions are to be expected this month, despite ongoing injury problems and abysmal form.

Asked again about the situation in his pre-Wolves press conference, Klopp dismissed suggestions he is “stubborn” in keeping faith with his current squad, but hinted that it may come down to a numbers issue.

“We look outside as well, it’s not that we are stubborn and think, ‘that’s it, we’ll go with these boys until 2050’. That’s not how we see it,” he told reporters.

“It’s each year the same. I cannot change my answers.

“If the solution for us would be out there, available and doable, of course we would bring in players to help.

“But we have an existing squad as well.

“We are underperforming, definitely, I know that. But I cannot sit here all the time and blame everybody else, the players and stuff like this.

“It’s my responsibility that they perform. It’s my first concern, my first job to do.

“Yes, we have limited options and all these kinds of things, but we have players with a contract here – they are just not available.

“If they would all be in, that would be a different situation, but they are not.

“It’s just not possible, our squad is not too small.

“Will we have to strengthen? Oh yes. But is this the right moment to do it?

“I cannot change the answer every week, because the situation doesn’t change – even when we lost another game since the last press conference.

“I know that, but that doesn’t change that situation.”