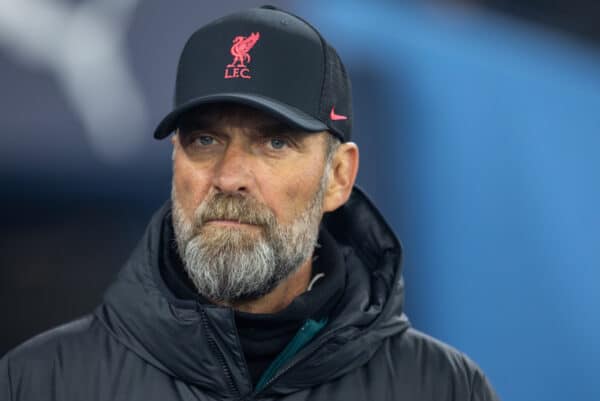 Jurgen Klopp has explained that Liverpool are planning to future-proof the squad with “two teams of the same level” as the fixture list increases.

The Reds have already made their first signing of the January transfer window, with Cody Gakpo arriving from PSV Eindhoven to joined a well-stocked forward line.

Gakpo, who could cost up to £44 million, will be competing with the likes of Mohamed Salah, Luis Diaz, Darwin Nunez, Diogo Jota and Roberto Firmino, as part of a £290 million unit.

While some supporters have questioned the decision to sign another attacker when the glaring problems are in midfield, Klopp has suggested it was a deal too good to pass up.

And it comes – ahead of the introduction of an expanded 36-team Champions League in 2024/25, which will add at least four games to the calendar – as Liverpool aim to have “two teams of the same level.”

“I’m now [here] seven years and two or three months, every transfer window is pretty much the same,” the manager said ahead of the trip to Brentford.

“We talk about these kinds of things as if money wouldn’t play a role, like ‘who cares?’.

“But it will never be like this, that you just spend money.

“I don’t want to disappoint anybody, but we signed an outstanding player like Cody Gakpo and the next thing you read is ‘who next?’.

“It’s as if we wouldn’t have a team, honestly. We cannot play like Monopoly. It’s like this and we never did, so I don’t understand that.

“Of course we cannot just spend – and never could, surprisingly. We always sorted our situations.

“It’s a big part of my philosophy, really working full of faith and trust with the players you have, and not constantly questioning them by telling them that we need another player for that or that position.

“I think with Cody it’s obvious, and not only because we have that void now: the quality he has, the timing is perfect.

“If we would have waited until the summer it would have been definitely even more expensive, or somebody else would have picked him.

“So there’s a lot of potential, it makes absolute sense.

“And with the games we will have in the next years, the games will not get less. We will have more games and all these kinds of things.

“So it’s clear that you need real quality in all positions, and probably two teams on the same level, if you want, so that you can rotate and these kinds of things.

“That’s what we try to prepare, obviously.

“But that somebody’s surprised when I say we will not now start ‘splashing the cash’ – we never did it and I know it anyway. That should be really clear.

“Again, if there is something we can do – and that was always the case – and that means right player and financial situation, we will do it. And if not, then not.”