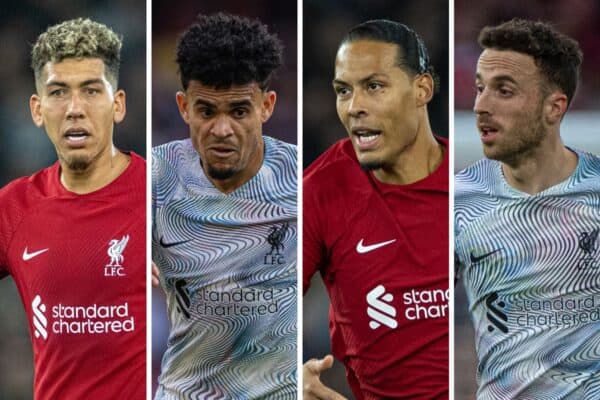 Liverpool injury latest: When Diogo Jota, Luis Diaz and Co. are due back

Jurgen Klopp is currently without five senior players due to injury, but when can we expect them to return to action for Liverpool?

Liverpool are 30 games into the 2022/23 season and only six senior players have avoided a fitness issue to date – seven if you add Cody Gakpo.

That means a total of 23 different players have been ruled out for at least one game due to an injury this season. Mindboggling.

It’s compounded the Reds’ struggles and created a vicious cycle, with the Reds’ forward line currently bearing the brunt of the fitness issues.

Let’s take a look at who is currently sidelined and when they are expected to return.

Injury: Hamstring
Out since: Brentford (A)
Expected return: February (earliest vs. Everton)

Van Dijk was forced off in the first game of the year and what was first thought to be a precaution then turned into a diagnosis of “more than a month” on the sidelines.

The earliest return is likely to be the Merseyside derby at Anfield on February 13, and if not then the trip to Newcastle on February 18 will be a target.

What Klopp said (Jan 6): “In the end, the diagnosis was pretty harsh, but we talk about weeks [out] – more than a month – [and not longer].”

Injury: Muscle
Out since: Man City (A)
Expected return: February

The situation with Firmino is a bizarre one, he has been unavailable since domestic action returned after the World Cup, missing the last eight games.

The No. 9 proclaimed that he was “already healed” on December 29, but nearly a month later has yet to return to team training after a setback in his recovery.

Firmino’s issue was initially estimated to leave him sidelined for “10 days to two weeks” but it’s now been five weeks. A return is not likely until February.

What Klopp said (Jan 13): “I don’t know exactly when he will be back, he’s not close to team training.”

Jota has been out of action since October and the return goal has always been February and the first leg of the Champions League last 16 tie against Real Madrid.

That falls on February 21, leaving four weeks for Jota to return to team training and start building back his match fitness. He’s making positive progress and Real remains a realistic target.

His return will be a major boost for the Reds when the time comes.

What Klopp said (Jan 16): “I don’t know exactly how long. He looks really good, he’s out there on the pitch. He’s doing a lot of stuff already.”

Injury: Knee
Out since: Arsenal (A)
Expected return: March at the very earliest

Just when Diaz was introduced back into the fold over the World Cup break after his initial knee injury in October, he was struck with another ligament injury that required surgery.

March was the earliest timeline provided soon after the news broke, meaning, in total, he will have missed at least 24 games. That return date, at the earliest, still stands.

Diaz has provided positive updates on his recovery on social media, starting to demand more from his left knee, which Liverpool will be cautious with as it is the second injury to the same knee in quick succession.

In all honesty, don’t expect him to play much of a part again this season.

A long-term thigh injury has kept Arthur in the medical room for over three months now after amassing just 13 minutes for Klopp’s side.

The Brazilian required surgery and reports have suggested he is making positive progress, but February will remain the target after being given an initial four-month recovery window.

What about Gordon and Ramsay?

Firstly, Kaide Gordon has not played a minute of action at any level since February 2021 thanks to a series of issues, which is surmised simply as the effects of growing pains.

It’s been a long road to recovery but he is slowly building himself back to full fitness on the outside pitches, with the club eager to take it slow and get him back on track for the long term.

As for Calvin Ramsay, you may have been wondering about his whereabouts having missed out on the last seven first-team matchday squads.

The Scottish right-back did feature for the U21s on January 8 but was shown a red card after just 22 minutes and his latest academy appearance was on January 22, playing the full 90.

In the interim, James Milner has deputised for Trent Alexander-Arnold and it wouldn’t be a surprise to see loan interest emerge for the 19-year-old this month. 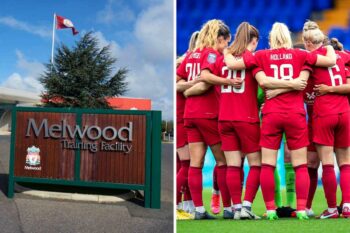