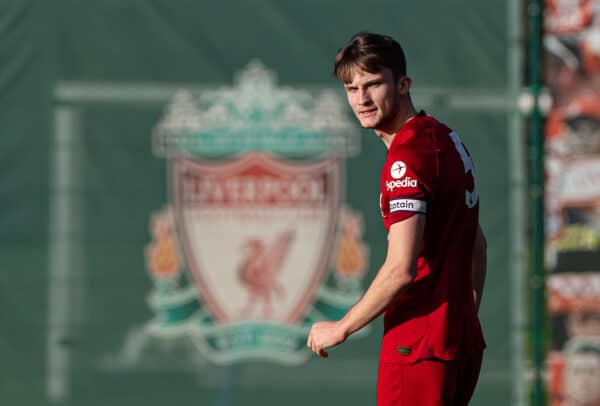 Despite goals from Terence Miles and Iwan Roberts, Liverpool under-18s were beaten 3-2 by Blackburn in their first game of 2023 at the AXA Training Centre on Saturday.

With the under-21s in action on Sunday, and the likes of Calum Scanlon, Lewis Koumas and Trent Kone-Doherty absent, Marc Bridge-Wilkinson named another very young team for the U18s’ first game in over a month.

Captain Miles opened the scoring for the Reds in the ninth minute, rising unchallenged at the back post to head in Tommy Pilling’s corner.

Roberts and Pennington both had opportunities to double Liverpool’s lead instantly, but five minutes after Miles’ opener, Blackburn were awarded a penalty after a reckless tackle from Francis Gyimah.

Goalkeeper Luke Hewitson went the right way but was unable to keep out Junior Nsangu’s spot-kick.

Pilling was hugely unlucky to not put Liverpool back in front with the last kick of the first half. His excellent free-kick crashed off the underside of the bar, hit the goalkeeper and somehow stayed out.

Hewitson was forced into a number of saves early in the second half, with the young Reds far from convincing in defence, and less than 20 minutes into the second period, substitute Ben Thirkill gave the away side the lead.

That was the first of three goals in nine minutes, with Liverpool striker Roberts, who has only recently returned from injury, guiding home Pilling’s inviting cross to level the scores once more, before Ari Shaw put Blackburn back in front from close range.

Gift saw his header tipped over late on, and substitutes Kareem Ahmed and Fola Onanuga both had half chances, but it was too little, too late for Liverpool.

The result leaves the Reds seventh in the U18 Premier League table, who will now look ahead to an FA Youth Cup clash with Port Vale and a mini derby against Everton next week.