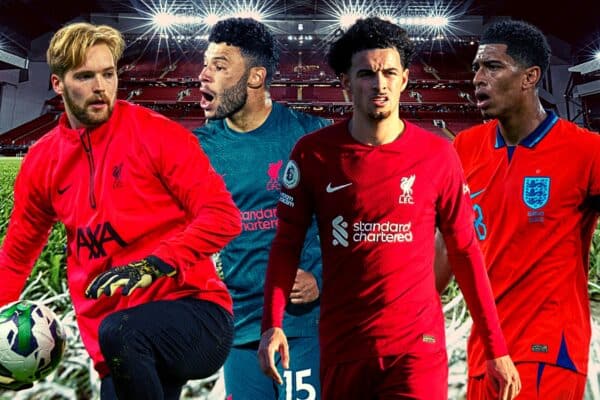 Liverpool could face a problem with the homegrown quota in their squad next season, but there are solutions in-house and in the transfer market.

Here, we explain the homegrown rules for the Premier League and the Champions League, the problems facing Liverpool and which players could solve them.

What is a homegrown player?

In the Premier League, a player counts as homegrown when they have been registered to an English or Welsh club for a period of three seasons (or years) before his 21st birthday.

Players aged 21 or under can be homegrown but do not need to be registered.

In the Champions League, eight squad places are reserved for ‘locally trained’ players, which are either:

Who are Liverpool’s homegrown players?

In terms of the Champions League, a 24-man squad was registered with UEFA in September with seven locally trained players; three are classed as club-trained and four association-trained.

Oxlade-Chamberlain was not registered for the Champions League group stage but would be eligible as association-trained.

Harvey Elliott and Curtis Jones were among those registered as under-21 players.

So where is the problem?

The problem comes next season, with the futures of at least four of those homegrown players in question.

Oxlade-Chamberlain and Milner are both due to see their contracts expire in the summer, while Kelleher and Phillips are expected to push for moves elsewhere.

That would leave Liverpool needing to find solutions either in their wider squad or in the transfer market.

Are there any players eligible from next season?

Yes, and there is a likelihood that one or more of those will take up homegrown spots in the Premier League and Champions League from 2023/24.

Jones, homegrown and club-trained, is the obvious candidate, but there are eight other players eligible as homegrown from next season.

However, they would obviously need to be up to the standards required to play first-team football for Liverpool.

Adam Lewis and Anderson Arroyo, who are both 23, are technically eligible as homegrown players already, but were sent out on loan instead.

Could Liverpool find solutions in the transfer market?

There is a strong chance that Liverpool would prioritise homegrown status when weighing up potential targets for the summer transfer window.

That has already been suggested when it comes to replacing the soon-to-be free agent Adrian – and potentially Kelleher – with Hannover goalkeeper Ron-Robert Zieler qualifying as homegrown due to his time spent with Man United.

Jude Bellingham would qualify as homegrown in the Premier League but would not need to be registered until 2025/26.

He would be eligible as association-trained in the Champions League.

When are other notable youngsters eligible?

Here is when 16 youngsters considered either part of the first-team squad or on the fringes would need to be registered as homegrown in the Premier League:

Carvalho presents the next immediate solution after Jones, along with loanees Tyler Morton, Owen Beck and Marcelo Pitaluga.

Elliott will take up a homegrown slot from 2025/26, along with Calvin Ramsay and goalkeeper Harvey Davies, while Kaide Gordon and Stefan Bajcetic are likely to do so in 2026/27.

It won’t be until 2027/28 that Ben Doak and Bobby Clark will need to be registered.