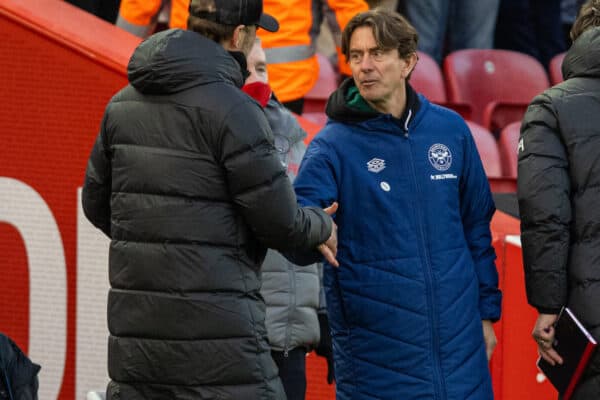 “Midfield is key” for Toney-less Bees – The view from Brentford

Brentford could prove to be a huge challenge for Liverpool on Monday night, with confidence sky high among Bees supporters.

The Reds somehow picked up a 2-1 win at home to Leicester on Friday, making it four Premier League wins in a row for the first time since April.

At the same time, Brentford were sealing an impressive 2-0 triumph at West Ham, taking them into ninth place in the table.

Now, Liverpool head to the Brentford Community Stadium for what could be a big test under the lights in west London on Monday night.

Ahead of the game, we spoke to Brentford fan Billy Grant (@billythebee99) to hear about the Bees’ season, the Reds’ top-four hopes and much more.

How would you assess Brentford’s start to the season?

A double Manchester scalp, beating Man United 4-0 at ours and Man City 2-1 at theirs isn’t a bad couple of results to add to the CV.

Injuries are still hampering us, but we’re coping with losing players better than we did last season.

Ninth place in the Premier League heading into 2023 – I’ll take that.

How much will you struggle without Ivan Toney?

Ivan Toney is obviously a quality striker and a key player for The Bees.

Naturally, we will miss him – not only his goals but his all-round play.

We did OK when he was out of the team last season, however, but I wouldn’t want to lose him for a while. That would be a blow.

Christian Norgaard has been out for most of the season, but he returned against Tottenham on Boxing Day and bossed midfield. He was quality.

He wasn’t fit enough to play the full 90 minutes and when he went off, the game turned Spurs’ way.

Rico Henry has also been next level this season – how he’s not in the England squad, only Gareth Southgate knows – and Mathias Jensen has also been superb.

Lewis Keane-Potter, who we signed from Hull for a lot of money, has shown flashes but overall he’s a little out of his depth.

I would like to think Liverpool fans will agree with me if I said your season has been disappointing.

It started with a poor result against F*lham and you have had a few shockers since.

I thought Liverpool were nailed-on for a top-two finish this season, but I have to admit, Arsenal were very good when we played them.

If anything, the World Cup break may have done the Reds a favour. There’s a long way to go.

Which Reds player who you most like to have at Brentford currently?

We might need to nab Mo Salah if Toney is injured for a while, or disappears for a spell!

Looking ahead to Monday, where will the key battles take place?

Midfield is key for us. If Norgaard and Jenson are on fire, we’ve got a game on our hands.

Ben Mee did a great job on Harry Kane, barring the goal he scored, and he will be a key performer up against Salah on Monday night.

I’m going to go for a 5-4 Bees win, especially if last season’s match is anything to go by.