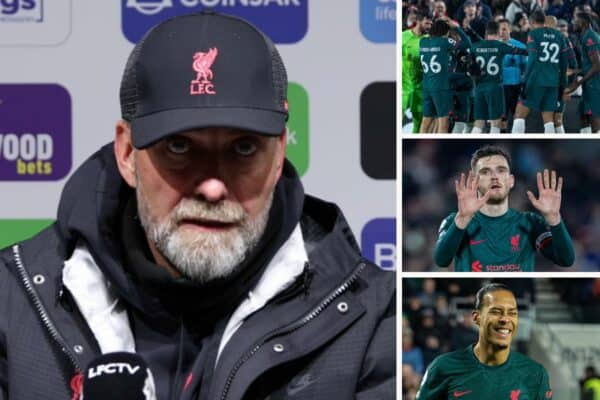 After Liverpool were beaten 3-1 by Brentford in their first game of 2023, in his post-match press conference, Jurgen Klopp criticised VAR, explained his three half-time substitutions and more.

Klopp and Liverpool’s players were livid with referee Stuart Attwell when Brentford‘s third goal was not disallowed.

The boss believes Bryan Mbuemo should have been penalised for a push on Ibrahima Konate, claiming VAR “hides behind” the “clear and obvious” excuse.

“In the moment when we tried to settle again, we conceded the third goal which should have been disallowed,” Klopp said.

“It’s a full throttle sprint from two players, and when you then get a push in this moment, you lose balance and you go down.

“Of course it’s not a harsh foul but it’s just a little situation you whistle away, but Stuart Attwell saw it differently and the VAR who checked it hides behind the phrase “it’s not clear and obvious.”

There were enough warning signs for Liverpool. After taking the lead through Konate’s own goal, Brentford had two goals disallowed later in the first half.

The Reds really were on the ropes when Yoane Wissa did eventually double the home side’s lead, and Klopp believes that was the decisive moment in the game.

“We were not awake when they went against our back line again, and the second goal decided the game,” Klopp said.

“The second goal decided the game because coming out of half-time and scoring the equaliser would have been much nicer than just the first goal.”

When Virgil van Dijk was one of three substitutions made it half-time, the question on everyone’s lips was whether he was injured, or whether it was a tactical decision.

The answer was perhaps somewhere in the middle. Van Dijk felt discomfort in his hamstring, and despite feeling he could carry on, Klopp took the decision out of his hands.

“Virgil felt the muscle a little bit but said he was fine, and he’s a very good judge of these kind of things, but I didn’t want to take any risks,” Klopp explained.

“The physios looked quite happy about that, but I don’t think it’s an injury, I think he just felt the intensity.

“The other two things were tactical. We could bring on Naby, who I thought had a really good game, and Robbo, who was exactly what we needed, that speed in behind. That was the reason for these changes.”

Not many options for changes

Klopp also suggested he would like to have more game-changers to choose from on his bench.

Curtis Jones and Fabio Carvalho were the only real offensive options he could have called on against Brentford. Cody Gakpo should be available to face Wolves on Saturday, but it’s clear the boss feels injuries remain a problem.

“We have a lot of players not available in the moment,” he added.

“You can see that with our changes, it’s not that we can throw on different offensive players to give someone a rest. They all pretty much have to fight through.”