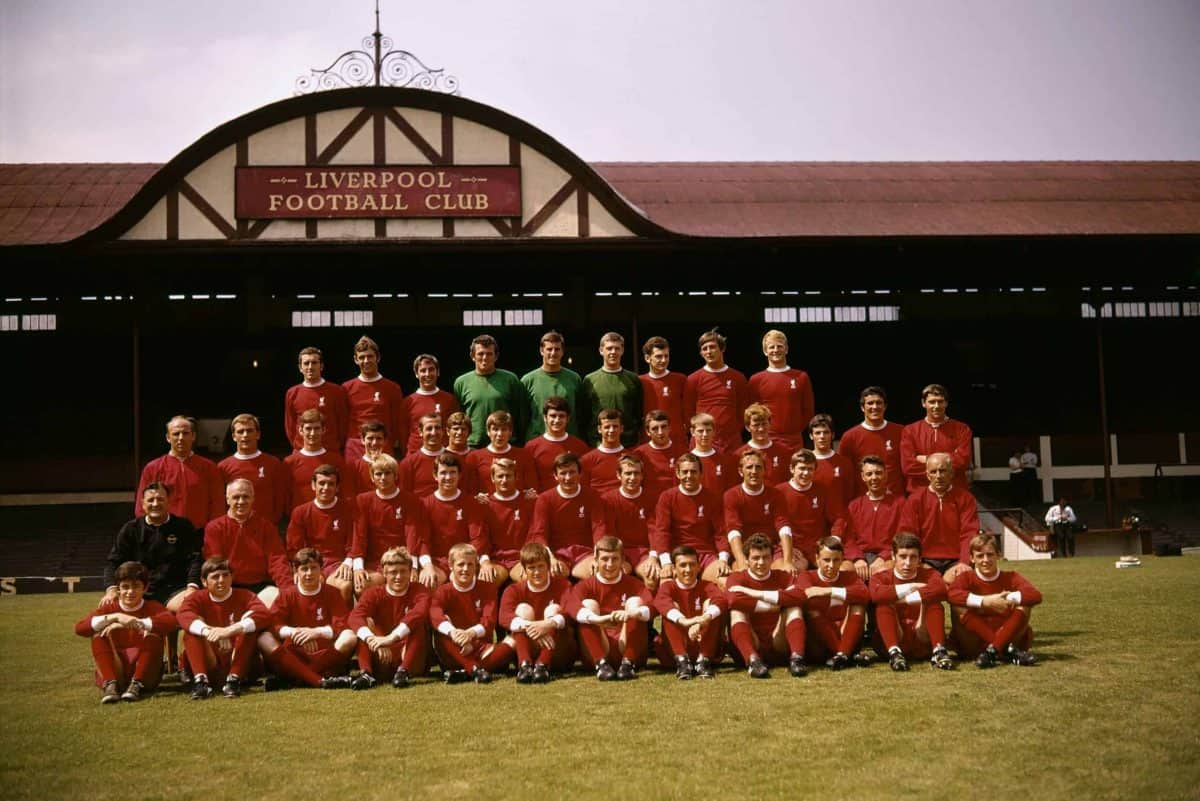 Larry Lloyd ‘“ Timing is Everything

Whenever a player leaves a club, there’s always a certain amount of concern that he may come back to haunt his former employers. That is definitely the case with Larry Lloyd, who ended a fairly short but quite successful career with Liverpool, and then went on to find even greater glory elsewhere, including several successes against his former club.

Laurence (Larry) Valentine Lloyd was born on October 6th, 1948, in Bristol England. In 1967 he was signed by his hometown club Bristol Rovers, where he made forty three appearances over two seasons. Then, in April of 1969, along came an offer from Bill Shankly, who was looking for a number of replacements for his ageing squad. His first season was spent mostly in the reserves, learning The Liverpool Way, and making a few appearances in place of Ron Yeats. Shankly had seen enough qualities in twenty-one-year-old Larry Lloyd’s play, especially his tackling and aerial strength, that he easily tagged him as an ideal partner for Tommy Smith in the heart of defence, after it was decided that it was time for Ron Yeats (and many others) to move on. He was also noted for his ability to take possession at the back, and quickly identify the best way forward into attack. His skill at distributing the ball gave confidence to his team-mates to start pushing forward as soon as he had it on his trusted left foot.

Thus Larry Lloyd became one of the pillars of Shankly’s second great squad. Yeats, Hunt, St. John, and Lawrence, were all dropped in favour of Lloyd, Heighway, Clemence, Hall, and other young players. As the 1970’s began, only Tommy Smith, Chris Lawler, and Ian Callaghan remained from the 1960’s roster. Amazingly, it only took two seasons before Lloyd and the rest of the new players found themselves closing in on major trophies when they faced Arsenal in the 1971 FA Cup Final. Unfortunately, it was not to be as Arsenal won 2-1 after extra time. That season also saw Larry Lloyd and his new Liverpool colleagues gaining some valuable European experience as they reached the semi-final of the European Fairs Cup. By the time that season ended, Larry had played over fifty first team games.

The partnership of Larry Lloyd and Tommy Smith was regarded as one of the hardest central defensive pairs in the league at that time. Alf Ramsey recognised Lloyd’s physical strength and work ethic, and invited him to make his international debut against Wales, just a few days after the FA Cup defeat, on May 19th, 1971. That was to be the first of only four full caps for England, added to his eight caps for the Under-23 side.

The 1972-73 season saw double success for Larry Lloyd and his team-mates as Liverpool won the League Championship and the UEFA Cup. The club played a total of sixty six competitive matches that year (forty two League, four FA Cup, eight League Cup, and twelve UEFA Cup) and Lloyd showed how durable he was by playing in every minute of every one of those games. That looked to be the height of Larry Lloyd’s Liverpool career, as a thigh injury kept him out of most of the 1973-74 season. As a result, Phil Thompson took his place in central defence and went on to keep Larry out for the remainder of the season. That included the 3-0 FA Cup Final win over Newcastle, shortly after which Bill Shankly made his shock announcement that he was retiring from football.

As Bob Paisley took over from Bill Shankly, Phil Thompson was the preferred choice in Paisley’s more ‘œcontinental’ side, and Larry Lloyd became surplus to requirements. It was a sad day in August of that year when he was sold to Coventry City at the age of twenty six. At that time Larry Lloyd should have been looking forward to more success with Liverpool, and it was considered to be the end of his successful years as he was perceived to be dropping down a level. At the very least, he could be considered to have been a faithful servant to the club over the five years that he played, and that he was well worth the money as he only cost Â£50,000 and was sold for Â£225,000.

Larry never managed to settle at Coventry, and after fifty appearances over two seasons he was ready for a transfer out. At that moment in time, things must have looked bleak. But, a resurrection was soon on the cards as he was sold to second division Nottingham Forest for a bargain price of Â£60,000. That transfer is often regarded as one of Brian Clough’s masterstrokes, with Forest going on to win promotion at the end of the 1976-77 season. The following year, Larry Lloyd collected his second League Champions medal as Forest won the League (seven points ahead of second place Liverpool) at the end of their first season back in the top division. In that campaign, Larry played a central role in a defensive unit that allowed a mere twenty four goals in forty two games. He also picked up a League Cup winners medal, after Forest beat Liverpool 1-0, in a replayed final after the Wembley match finished scoreless.

Those medals must have seemed like a good way to make up for the loss of his place at Liverpool, where he might have been picking up League, UEFA Cup, and European Cup medals. But that was not the end of his medal haul by any means. The following season, Larry Lloyd and Forest started off as they meant to continue with a win in the Charity Shield. Their League win of the previous season meant that they would be playing in Europe for the 1978-79 season, and it must have seemed like it had been scripted that the first round of that European Cup competition had them drawn against two time defending champions Liverpool. Larry Lloyd helped his Forest team-mates to a 2-0 aggregate win over the Reds, and then went on to take Ol’ Big Ears home to Nottingham. As if that wasn’t enough success already, Forest repeated as 1979 League Cup champions.

Larry Lloyd and Nottingham Forest retained the European Cup the following season, matching Liverpool’s record of two consecutive victories. By this time, there must have been a few questions as to how Liverpool had managed to let Larry leave. That was not quite the end of the story either. In the semi ‘“ final of the 1980 League Cup, Forest beat Liverpool over the two legs with a 2-1 aggregate score. Unfortunately for Larry, an injury kept him out of the final, where his team-mates lost out to Wolves. A surprising piece of trivia is that Larry Lloyd never played in a losing League Cup match while with Nottingham Forest.

The 1980-81 season was to be the last for Larry Lloyd at Forest, as he went on to take a player-manager position with Wigan Athletic. After two years there, he took the manager’s job at Forest rival Notts. County for a season. He may have ended his playing career by this time, but his physical attitude to the game had not changed at all. After his first game in charge as manager, it was pointed out to him by a reporter that nine of the eleven players had been booked, and was asked what he had to say about this. Larry simply looked straight at the reporter and said, ‘œWell, I’ll have to question the commitment of the other two.’

His managerial career ended at the conclusion of his first season in charge, after which he went on to become a pundit with Nottingham radio station Century 106, covering Forest matches for several years. He was as abrasive as ever in that role, being heavily critical of Forest players and management. Since leaving that career behind, he has been living in Spain.

For some players, a successful career with one club would be a dream come true. For Larry Lloyd, his unintentional timing of transfers allowed him to have two successful careers with two of Europe’s top clubs He also had the pleasure of winning several times against his former club, not letting them forget that it might have been a mistake to allow him to leave.