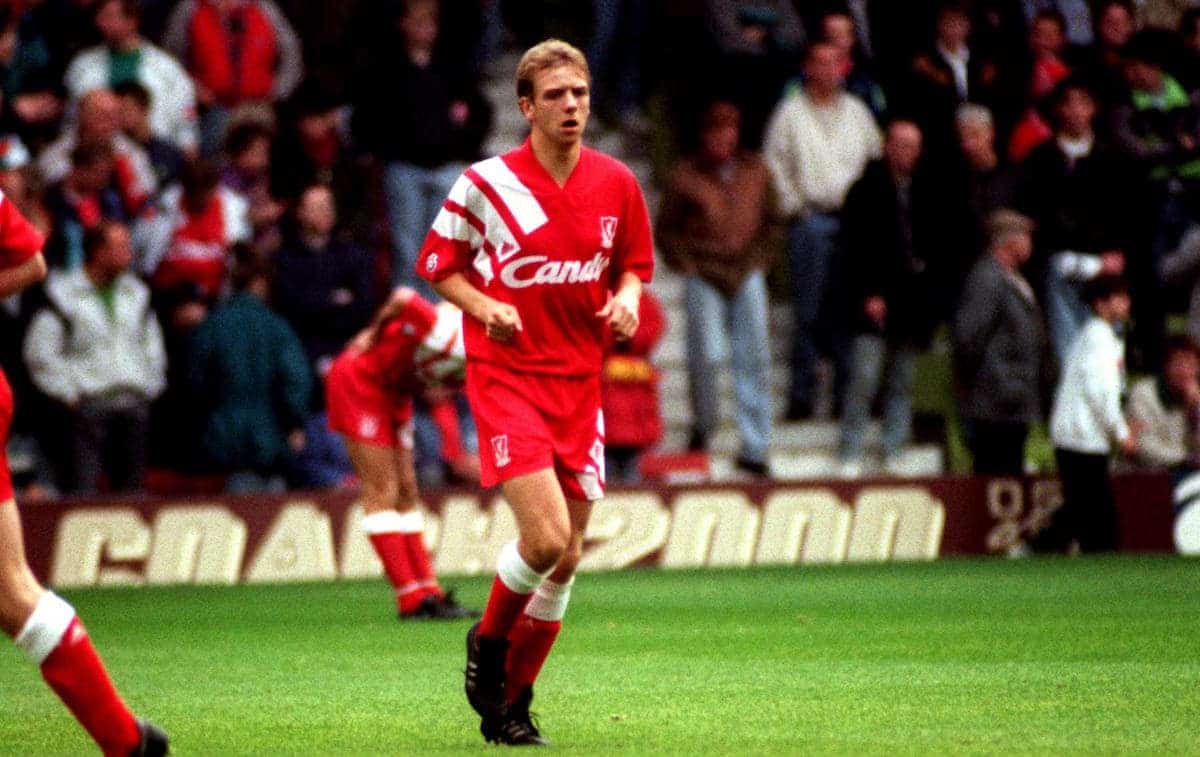 Early in the 1991-92 season, Liverpool were in the market for a right back to replace utility player Steve Nicol, who in turn had replaced legendary Phil Neal for a few seasons. To that end, Liverpool’s chief scout Tom Saunders had been contacted by Crewe Alexandra manager Dario Gradi, who suggested they take a close look at their current right back, who may be available for a transfer. Dario Gradi had become a legend in his own right at Gresty Road, having spotted and developed a stream of young talent, many of whom went on to become great players at the highest level. Some of those include Dean Ashton, David Platt, Robbie Savage, and Neil Lennon. Two other notable players to have passed through the club are former Liverpool midfielder Danny Murphy, who also progressed through the Dario Gradi youth system, and Bruce Grobbelaar, who was spotted by Liverpool scouts while playing at Crewe, on loan from Vancouver Whitecaps.

Souness and Saunders took their seats to watch this supposedly gifted right back, and were soon disappointed as the player they had travelled to see totally failed to impress. But, early in the second half, Crewe’s left back was switched over to the right side of defence and Souness and Saunders immediately saw the player that they wanted. That player was Rob Jones, and Souness acted immediately to bring him to Anfield for a fee of Â£300,000. In all of Souness’s signings over his three years in charge, it’s Rob Jones who is widely acknowledged as his most successful.

Robert Marc Jones was born on November 5th 1971, in Wrexham. He grew up as a Liverpool supporter, mainly because his grandfather Bill Jones was a Liverpool player from 1938 to 1954. Bill made 277 appearances for Liverpool, mostly as centre-half or right back, and had earned medals as a League champion in 1947, and as a runner-up for the 1950 FA Cup final. It was actually Bill Jones who took the place of Bob Paisley for that FA Cup final, which if nothing else could be an interesting answer to a difficult LFC trivia question.

Rob progressed through the School of Excellence and Youth Training Scheme programs at fourth division Crewe Alexandra FC, and signed professional forms in 1988 at the age of 17. His debut came shortly after that in April in a 3-1 victory at home to Darlington. The following season, Crewe finished in third place which earned them promotion to the third division, where Rob established himself in the squad and helped Crewe to finish in a respectable mid-table position. At that point, some serious interest was being shown in Jones and some other Alex players, with several scouts from top division clubs attending their games.

Liverpool played twice (two legs) against Crewe in the League Cup in September and October of 1990, and after a 9-2 aggregate thrashing it must have seemed like an impossible dream for the young Reds supporter to think that he would ever be a part of them. But, sometimes even impossible dreams come true and so it was that only a year later he was making his Liverpool debut, just two days after signing for them, against Manchester United at Old Trafford. It must have felt completely surreal to have suddenly gone from appearing in front of average crowds of between four and five thousand, to ten times as many spectators plus a national televised audience. What was even more of a dream was his performance in that debut where he neutralised the attacking threat of one of ‘œFergie’s Fledglings’ by the name of Ryan Giggs, and helped Liverpool to come away with a clean sheet and a point from a goalless draw. Rob was an immediate fan favourite and he was given the nickname ‘œTrigger’ by the Kopites, after the dim-witted character played by Roger Lloyd Pack in the comedy series ‘œOnly Fools and Horses.’

Liverpool travelled to Gresty Road in January of 1992, in the first match of their FA Cup campaign, where Rob was given a hero’s welcome from the Alex faithful, even though it must have been a bittersweet moment as Liverpool strolled to a 4-0 victory. The season culminated in a win at Wembley, where Liverpool picked up their fifth FA Cup, with a 2-0 win over Sunderland, and Rob now had a medal for Liverpool that his grandfather Bill had narrowly missed out on.

Rob Jones’s performances for Liverpool that season were impressive enough for England manager Graham Taylor to invite him to represent his country, on February 19th 1992, in a 2-0 friendly win against France. Even though Rob was born in Wrexham and could have played for Wales, he chose to represent England as he was eligible to do so from his parents’ nationality. From Gresty Road and the third division, to Wembley and international competition, via Anfield and the first division, all in the space of six months must have seemed more than a dream come true for twenty year old Rob Jones, but unfortunately the dream was soon to end and start to become a recurring nightmare. A few days after the 1992 FA Cup Final, Rob was diagnosed with shin splints, and was forced to withdraw from the England squad that travelled to Sweden for Euro ‘˜92.

The following season was much better, with Rob firmly establishing himself in the right back spot for Liverpool and for England, where in both cases he linked up brilliantly with Steve McManaman. But, he was surprisingly left out of the England squad for the crucial World Cup qualifier against Holland in 1993. That was the match that saw England lose and thereby fail to qualify for USA ’94, and was effectively the end of Graham Taylor’s reign as manager. Rob did see some overseas action though as Liverpool played in the European Cup Winners Cup, where he made two appearances (as well as nine appearances in other seasons in the UEFA Cup).

Rob Jones continued to be a regular member of Liverpool’s squad, even under manager Graeme Souness’s policy of chopping and changing players for each game. He was rightly regarded as the best right back in England during the next couple of years, and continued to hold his place when Roy Evans took over as manager in January 1994. Evans introduced a wing-back system, which Rob adapted to easily. At the end of Roy Evans’s first full year as manager, Rob picked up his second medal with Liverpool as they won the 1995 League Cup with a 2-1 win over Bolton Wanderers at Wembley.

The following season, Jason McAteer was brought in from Bolton, and was converted by Evans from a right-sided midfield player to a right-sided wing-back. Rob Jones switched over to the left side, also in a wing-back role, and even though it was not his ‘œnatural’ position he played it to good effect, with another trip to Wembley for the 1996 FA Cup Final. Unfortunately that’s one to be forgotten as Liverpool were on the wrong end of a 1-0 result, but worse news was soon to follow for Rob Jones. He couldn’t have known it at the time, but his eighth appearance for England that had come in March of 1995 was to be his last.

England were to host the finals of the European Championships that summer, and Rob should have been an automatic choice for Terry Venables as right back. But, shortly after the FA Cup Final of 1996, he was diagnosed with a cracked vertebra and had to withdraw from the England squad once again. The injury was so serious that he was advised to stop playing altogether or risk permanent disability. His rest and recuperation were to take six months, and after a long spell of returning to full fitness he only managed to make 5 appearances for the entire season. The following seasons were plagued with persistent knee injuries, forcing him out of the line-up for extended periods. In February 1998, a large swelling in his left knee was determined to require surgery to repair, but it was not to be successful. Four operations later, and no improvement caused Rob to accept that his Liverpool career was over prematurely in September of 1999. New Liverpool manager Gerard Houllier could see the extent of the problem and had already ruled him out of his future plans.

During the summer of 1999, he had gone for a pre-season trial with West Ham, who were to have signed him for the following season. He made one appearance in an Intertoto Cup match for the hammers, but the knee was a problem again and the injury was serious enough for West Ham to decide that they had no place for him. The only option left for Rob now was to announce his retirement at the age of twenty seven, after making 243 appearances for Liverpool, both domestically and in Europe.

Rob joined in a business partnership with his wife Sue, running the Kids Academy Nursery Group, a childcare centre in Warrington. Rob also runs football courses throughout Cheshire, as well as helping to look after the childcare business.

There have been several Liverpool players whose careers were cut short by injuries, and Rob Jones is unfortunately one of them. He has often been described as, ‘œThe best right-back that England never had’, and if it hadn’t been for the injuries that plagued him we might never have seen Gary Neville take that place for his country, as Rob would have easily held the position through the rest of the 1990’s and beyond.

Rob ‘œTrigger’ Jones was a popular player during his early years at Anfield, and his brilliant performances during those times were enough to earn him sixtieth place in the 100 Players Who Shook The Kop, even though he didn’t score a single goal in all of his 243 appearances. When we realise that his retirement at the age of twenty seven was well ahead of his prime, and that he would undoubtedly have contributed for many years following, we can only imagine how great he may have become.