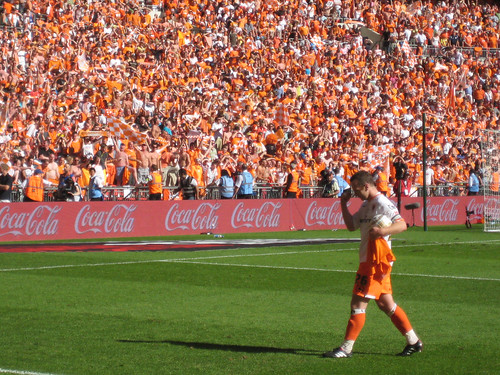 Blackpool manager Ian Holloway says his captain Charlie Adam can leave the club, but only at the right price.

The Scottish midfielder was the subject of a £4.5m bid from Liverpool last week and handed in a transfer request, which was rejected by the Seasiders, on Monday morning in order to get the move he desires.

Holloway joked how his Blackpool team mates serenaded Adam with a rendition of You’ll Never Walk Alone at training on Monday.

Holloway also described the phone call between Damien Comolli and Blackpool chairman Karl Royston “He [Comolli] ummed and aahed and apparently did not make much sense. We need to be compensated correctly in this matter and at the moment Liverpool are simply not offering anything like enough.”

“Charlie is our captain and best player – I have never had anyone as good as him, anywhere – and he has 18 months left on his contract. So if Liverpool want him now, instead of waiting until summer when it would be easier for us, they have to pay a fair price, a price that reflects the loss to us. That’s the way my chairman sees it and if Liverpool don’t do things correctly he will dig his heels in.

“If that happens a deal might not be reached because he’s one of the most stubborn, pig-headed men in the game. He has only just agreed to shell out on new showers. The way I see it is that if Chris Smalling is worth £10m – and he hardly ever plays for Manchester United – and Darren Bent is worth £24m, an offer of £4m for Charlie cannot be taken seriously.

“He ain’t going for that price, he’s got too long left on his contract and he’s much too important to us. Liverpool needed to start talks at around four times that amount; now it’s time for them to put up or shut up.”

Liverpool are expected to up their bid to around £5.5m but Holloway has indicated he values the player at double that.