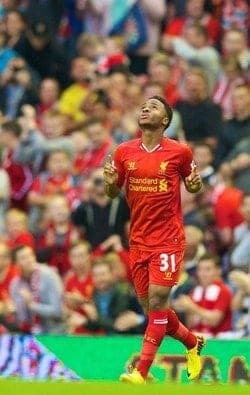 Liverpool edged through to the third round of the Capital One Cup on Tuesday night, beating League One side Notts County 4-2 after extra time at Anfield thanks to strikes from Raheem Sterling, two from Daniel Sturridge, and Jordan Henderson.

Sterling opened the scoring after just four minutes when he ran through the centre of the Notts County defence with close control to finish low and out of the reach of County keeper Bartosz Bialkowski.

Liverpool were hit with a blow, however, when new signing Aly Cissokho was forced off with an injury after just ten minutes. It was the French left-back’s first start for the club, and first appearance in a Reds shirt at Anfield.

Daniel Agger replaced Cissokho and saw his header come off the woodwork minutes later. Steven Gerrard would hit the post again later on in the first half.

Sturridge doubled Liverpool’s advantage when Gerrard’s through-ball found him in the penalty area, and the Reds’ striker hit a wicked shot past Bialkowski.

Yoann Arquin headed one back for the visitors just after the hour mark, before Kolo Toure hit the post at the Kop end a short while later.

Notts County then sensationally equalised with just six minutes to go – Adam Coombes with a right foot finish past Simon Mignolet in Liverpool’s goal to send the game into extra time.

More injury misery was heaped upon Liverpool during the first half of extra time when Toure was forced off – the Reds’ third injury of the night.

Sturridge squeezed in a shot from a tight angle at the end of the first fifteen minutes of extra time to get the Kop on their feet again.

Five minutes into the second half of extra time Jordan Henderson sealed Liverpool’s win with a fourth as the Reds finished strongly. Henderson took the ball forward from the centre circle, nutmegged Gary Liddle and sweetly placed the ball past Bialkowski.

Liverpool now turn their attentions back to the Premier League, with the visit of Manchester Utd to Anfield on Sunday.