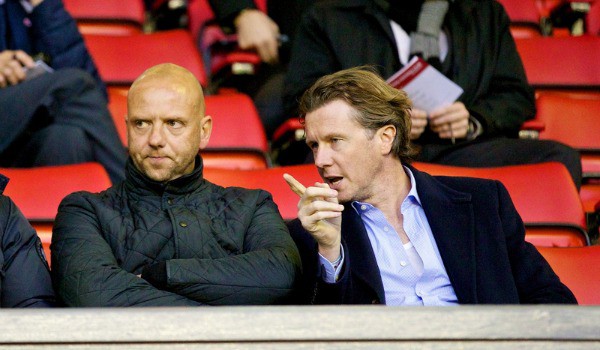 Brendan Rodgers’ desire to get former Liverpool players more involved at the club is starting to come to fruition, with Robbie Fowler, Steve McManaman and Rob Jones taking up roles within the academy. Jones, the former full-back who played for the club from 1991 to 1999, has taken up a part-time role as a mentor for the Under 21 side, working behind the scenes to support coach Alex Inglethorpe and his staff.

“Brendan asked me to get involved in some sort of role a few months ago” explained Jones to This Is Anfield. “It’s nothing full-time but I’m there to support the staff and offer advice to players.”

“I spoke to Ryan [McLaughlin] and Joe [Maguire] and have had a good response from the lads so far. They have a great team spirit and togetherness about the group.”

Jones was at last week’s Under 21 match against Sunderland (pictured above) alongside another player returning to the club, Steve McManaman.

They will also be joined by Robbie Fowler – whose role will be more involved. The legendary striker is currently working towards his UEFA ‘A’ coaching licence.

Earlier this year, Rodgers explained to The Liverpool Echo:

“We will be looking to do that [get former players involved] in a number of areas, whether that be through coaching or ambassadorial roles, but there’s nothing concrete at the moment. The most important thing for me is the club, not Brendan Rodgers. I stressed to the owners that this is something I want to push forward in the summer.”

Credit to Rodgers who has identified the lack of former players involved at the club and whose advice can be invaluable to players progressing in the academy.