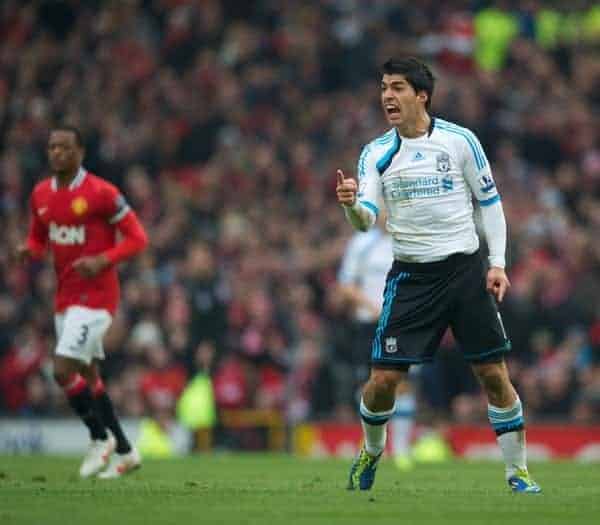 It’s all set up for a mouthwatering encounter on Wednesday night as Liverpool travel to Manchester United in the League Cup third round. And Luis Suarez is back just in time. Monday’s Papers: Luis Suarez to return a wiser man, or fasten your seatbelts?

The Uruguayan has served his 10-match ban for biting Chelsea‘s Branislav Ivanovic back in April and is eligible to face Liverpool’s arch rivals.

Both sides lost in the Premier League at the weekend – Liverpool dropping to their first defeat of the season at home to Southampton, whilst United were humiliated 4-1 at Manchester City.

Both teams could do with getting their league campaigns back on track at the weekend, but any game between these two foes is never overlooked.

The Reds will have one eye on Sunday’s clash against Sunderland (now without Paolo Di Canio) in the league.

Considering his lack of matches recently, and the intensity of a Man Utd vs Liverpool fixture, we’re asking you today, would you start Luis Suarez against United on Wednesday?

We’ve got a poll running below and we also want to hear your views, so leave them in the comments below, or tweet us @thisisanfield.