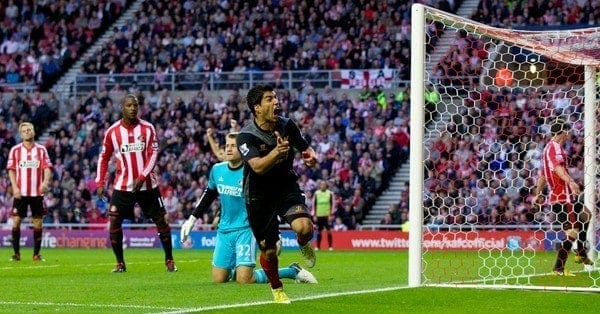 Rory Fitzgerald provides another in-depth analysis of what Liverpool may face from the opposition on Sunday. Caveat: Given the exit of Paolo Di Canio, the Sunderland team, set up and style of play could be radically different than what has gone before. However, below is a look at what Sunderland looked like under Di Canio and what we may see if there are not wholesale changes.

At the start of the season, Di Canio laid out his philosophy;

“We want to attack, we want to entertain and we want to score goals and the players we have brought in will make us much more able to do that. When we have the ball, I want us to be 4-2-4 with the wingers, pushing forward to join the attack and the full-backs moving up. For me, the wingers are crucial. I came here to play attacking football. I told them before the start of the season if we play well and deliver a clear identity on the field I prefer to lose and play well rather than win and play very bad”.

Di Canio settled on a defensive partnership of Diakite and O’Shea. One of the main facets of the team was also settled on, the partnership between full back and winger. Jack Colback and Giaccherini were deployed on the left whilst Celustka backed up Adam Johnson on the right. After that, there have been no settled partnerships in midfield nor upfront. Sunderland only managed to dominate possession in 2 games – at home to Fulham (lost 1-0) and away to Crystal Palace (lost 3-1). Given that they dominated possession, the average pitch position from these games give an idea of what Di Canio was trying to achieve. In both games, Johnson and Giaccherini play high up the pitch.

The role of the wingers was more focused on influencing play and getting on the ball in oppositions half and, ideally, in the final third rather than getting involved in deeper areas in the build up as this was left to the full backs to provide options on the flanks for the midfielders. Below is an example of where Johnson & Giaccherini got involved in the build up play away at Palace. They largely received the ball in the oppositions half and look to create opportunities from high up the pitch.

Part of implementing such system was to encourage the players to play more football rather than playing a longer game that they had been under Martin O’Neill. Overall, they have attempted the sixth fewest long balls and in home games alone (sample size of only 2 though!) that figure drops with only Arsenal playing fewer long balls when at home. The graphic below shows the attempted long balls against Arsenal (which is very low), though this is part because Arsenal dominated possession. Removing the kicks from Westwood, there were very few attempted long passes from deep areas. What is perhaps noticeable is the direction of alot of the passes, towards the left of the pitch.

Note that in the 2nd graphic, this is little changed from last season i.e. they were a team that looked to create from the flanks and not the central areas.

Without the ball, the 2 widemen are expected to fall back into line with the midfield and make 2 banks of 4 which are compact. However, when possession is turned over, Sunderland invariably have an issue with the position of the wingers leaving them light in midfield which was acknowledged by Di Canio. In the 5 league games this season, not once did the same midfield duo start.

“The problem comes when we lose the ball in the middle and we are empty in the middle, there is a big space. We will change a bit now. That’s because I want to give them more confidence, because in this moment the two in the middle are not confident to play together and so we change continuously.”

— Di Canio recognises problems before the WBA game but still starts Ki in a midfield 2 with 2 wingers and 2 strikers.

The turbulence in midfield was recently highlighted when Di Canio attempted to make peace with his former captain, Lee Cattermole, who is returning after a long injury. He has publicly admitted that Cattermole was not in his plans and was stripped of the captaincy and the No.6 shirt and given No. 33. Even when the olive branch was offered, it contained some thorns.

“In the last training session I see he can pass the ball. I have a long way to work but I recognise the makings of a good footballer”.

Had he found a settled partnership in midfield, it is doubtful that Cattermole would ever have received a reprieve.

Below is a look at the kind of goals that Sunderland conceded against Arsenal. However, there were 2 other times when Walcott got down the left side of Sunderland‘s defence between Colback and Roberge – both of which occured when Arsenal won back possession and moved quickly before Sunderland could pull men back behind the ball. However, even as shown with the 3rd, even with men behind the ball there is the possibility of individual errors to exploit.

With all that said, Diakite hit the cross bar in the first half from a corner kick whilst in the 2nd half, they won a penalty, hit the post, had an offside goal ruled out and then the controversial incident between Sagna & Altidore on the edge of the box.

Di Canio attempted to implement a boldly adventurous brand of football which aimed at creating a stylish 4-2-4 system by bringing about more neat passing out from the back and less of the longer/direct route of football previously played. This was (perhaps naively) done with players in situ not used to this game combined with attempts to integrate 14 new players brought into the squad by the new director of football, Roberto De Fanti.

Then it is possible that Kevin Ball may look to deploy a system closer to 4-5-1 by bringing in an extra midfielder to tighten up the center of the pitch. He may also look to reduce the attacking tendencies of the wide players, full-backs & wingers alike, as the full backs were given the mandate of pushing up to allow the wide players make their impact further forward.