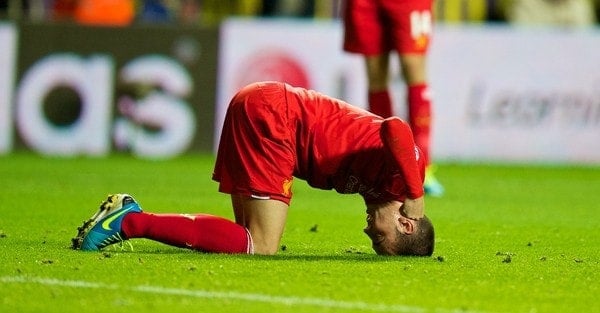 It’s not been the best of starts to his Anfield career so far and now Iago Aspas is facing up to five weeks on the sidelines. The Spanish forward, who arrived from Celta Vigo in the summer, is yet to score a competitive goal in his six appearances for The Reds.

He tweeted on Friday to say he could face five weeks on the sidelines:

Liverpool confirmed that Aspas had suffered a torn thigh muscle in training:

The 26-year-old picked up the injury at Melwood on Thursday and has subsequently been assessed by the Reds’ medical staff.

He is expected to be available for a return by the beginning of December – a month which includes seven Barclays Premier League fixtures for Brendan Rodgers’ team.

Liverpool fans reacted to the news on twitter, here’s the best of the reactions:

It's a shame that the impact Iago Aspas has had since he's joined us means I'm actually not bothered at all by his injury. #LFC

Aspas sidelined for up to six weeks. Not a great start to his #LFC career. Doesn't really open up opportunities either.

Iago Aspas' difficult start to his Liverpool career continues. The forward has been ruled out for up to six weeks with a torn thigh muscle.

Maybe it's a positive thing for Aspas that he's injured, allows him to get more adapted and work on his strength.

Is #Aspas this Seasons #Borini two players who are strikers who cannot force their way into the team who have picked up injuries? #LFC

Aspas out for 5 weeks. pic.twitter.com/KwJr61EL0m

See also: What does the future hold for Aspas at Liverpool?