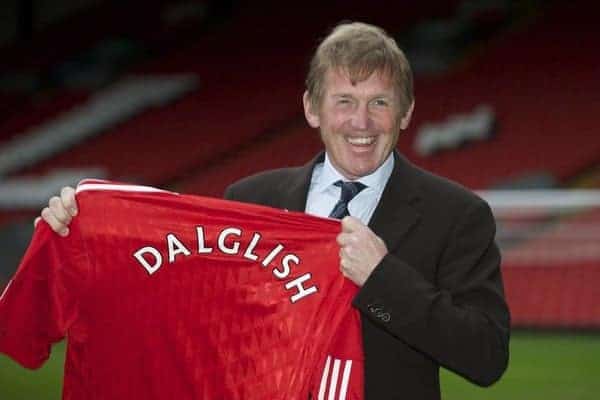 Liverpool fans and reporters have reacted with elation to the news that Kenny Dalglish is to return to the club as a non-executive director. Rodgers was key to Dalglish's return. Current boss embraced the idea. Secure in his own role and can only see positives from having him back

Non-exec role great idea for Kenny. No need to be involved day-to-day but can still have big input on the strategic side of club #lfc

Also about time we had a "football person" involved in assessing performance. Good move all round! #lfc

Absolutely what the club needs, this. #Dalglish

Dalglish joins the #LFC board. Not a moment too soon.

Needless to say but I'm chuffed @kennethdalglish is back @LFC as @michaeltnevin once said; 'he's our Kenny Dalglish' #lfc

Kenny Dalglish: “There is no one anywhere in the world at any stage who is any bigger or any better than Liverpool football club.”

Welcome back home @KennethDalglish I love you!!! #LFC

King Kenny back! A proper football man on the board!

Interesting to see #LFC picking pieces of continental teams' strategies. First there was Fowler, Macca & Jones at Academy ala Ajax.

Now there is Dalglish on the board like Bayern Munich.

@liverpooldeep I think it's nice to have a 'football person' on the board to offer a balanced, sporting view to a load of business men.

@robbohuyton been the norm at clubs like Bayern ,Dortmund, Boca, Madrid, Barca and even Man U to name but a few. Spot the theme #success

Think it's fair to say the decision to offer @kennethdalglish a place on the #LFC board of directors has gone down pretty well!