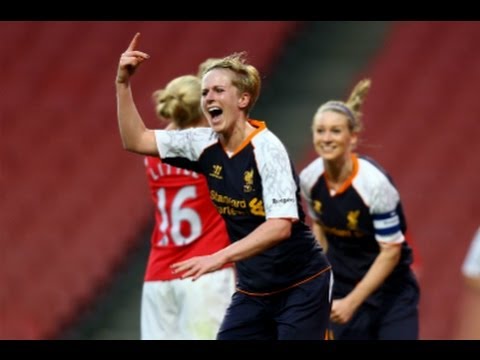 Following a magnificently successful transformation Liverpool Ladies were crowned Champions of England for the first time in their 24 year history.

In this first part of this two-part Champions Review Special, Heather Carroll looks at the transformation of the team and the key games throughout the season.

Thanks to a healthy investment and relationship with Liverpool Football Club, the Ladies brought in 12 new faces after finishing the 2012 season bottom of the league for the second successive year. During the summer transfer window manager Matt Beard also brought in 4 new recruits.

It has not been an easy ride by any means and as proved by Chelsea Ladies (who finished 2nd from bottom), investment does not necessarily lead to success on the pitch. During the second half of the season Liverpool really had to fight to stay at the top of the table, read on below to see how they won the league.

Arsenal have dominated Women’s Football in England for the last 10 years, previous to this year they had finished first in the last 9 consecutive seasons. A couple of weeks prior to this league tie Arsenal had beaten Liverpool 2-1 in The FA Cup Semi-Final at Anfield.

This game was played at the Emirates Stadium and despite the scoreline was a strongly contested affair. Before Amanda Da Costa opened the scoring with a wonderfully taken strike, fellow American Whitney Engen somehow produced an incredible goal line clearance to prevent the Gunners from taking the lead.

Goals from Louise Fors, Natasha Dowie and a second from Da Costa completed the shock result suprising many within the Women’s game, showing Liverpool Ladies can compete and beat the top clubs. This was also Arsenal‘s first league defeat in almost 2 years.

An assured display over last years WSL runners up ensured Liverpool Ladies topped the WSL table going into the break.

With Gemma Bonner missing this game through illness, Amanda Da Costa comfortably slipped on the armband to captain the reds to victory.

Nicole Rolser put Liverpool in front, scoring after Natasha Dowie’s strike rebounded off the post. Birmingham equalised shortly after, Kerys Harrop making the most of the reds failure to clear from a corner. Lucy Bronze then capped an impressive first half performance to powerfully head home from a corner herself and sent Liverpool in at half-time 2-1 up.

In the day’s earlier fixture between Bristol Academy and Lincoln Ladies, the Vixens had momentarily leapfrogged us in the table. Natasha Dowie scored her 10th goal of the season and Nicole Rolser added her second of the game to propel Liverpool back into 1st place.

A second 4-3 victory within a week displayed perfectly the Liverpool Ladies fighting spirit.

2-0 down inside 10 minutes against a struggled Chelsea side forced the reds to regroup, Fara Williams played her best game in a red shirt – pressing high up the pitch and urging her team-mates to follow suit. Williams pulled a goal back after being awarded a free kick, swinging the ball in towards Carly Telford’s near-post and bouncing under the Chelsea keeper.

Nicole Rolser added a second after half-time to draw the scores level before Becky Easton unluckily diverted a Chelsea cross into the back of her own net, despite going behind again Liverpool’s heads did not drop.

Leading scorer Natasha Dowie powerfully headed home and then set up Nicole Rolser for the winner to gain an all-important 3 points in the title quest.

At this stage in the title race, Arsenal Ladies were still in contention while also having a game in hand. Midweek Arsenal themselves had paid Doncaster a visit, putting 6 goals past the Belles defence and closing the gap on our goal difference.

With that in mind Gemma Bonner opened the scoring on just 3 minutes before Doncaster were reduced to 10 and Louise Fors added a second from the penalty spot. Natasha Dowie scored a first-half hat-trick and Fara Williams netted twice to send Liverpool in at half-time 7-0 up.

Easing up slightly in the second half, Nicole Rolser and Kate Longhurst scoring the 8th and 9th goals of the game respectively to put Liverpool firmly back in pole position with regards to goal difference.

Going into this final day fixture having won their last 6 games in a row, Liverpool needed just a point in this title decider battle against Bristol Academy – for whom only a win would suffice.

From the opening whistle Liverpool looked the team most likely to score, Natasha Dowie, Amanda Da Costa, Nicole Rolser and Fara Williams all with efforts on goal. Only a fine performance between the posts from Bristol keeper Siobhan Chamberlain prevented the reds from taking the lead earlier.

Nicole Rosler was brought down in the box and correctly awarded a penalty, Louise Fors coolly stepped up to score past Chamberlain.

With just over 10 minutes to play, Katrin Omarsdottir all but confirmed the title for Liverpool with a strong finish after Whitney Engen’s free kick was cleverly knocked into her path by Natasha Dowie.