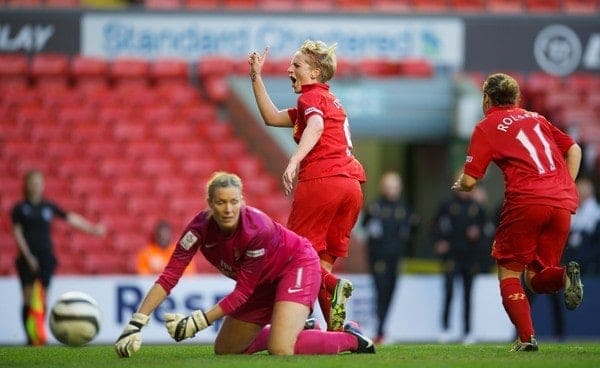 Following a magnificently successful transformation Liverpool Ladies were crowned Champions of England for the first time in their 24 year history.

In the second part of this Champions Review Special, Heather Carroll looks at the highlights of the season and brings us a player-by-player review.

Congratulations to @LFCladies on being crowned Women’s Super League champions after a 2-0 win over Bristol Academy! pic.twitter.com/hmBtvSpRAB

Liverpool’s team spirit has been much lauded this season, a group of players almost completely unfamiliar to eachother quickly bonded on and off the pitch. Matt Beard brought together many nationalities and players who had different types of experience, credit must go to the Liverpool manager and staff for putting this brilliant squad together. While home games are played at the Select Security Stadium in Widnes, when the announcement came that the FA Cup Semi-Final versus Arsenal was to be played at Anfield this sent a ripple of excitement through players and supporters alike.

Despite the result the Ladies put in a great shift against a tough Arsenal side and can be proud of their performance at the famous stadium. A memorable occasion for everyone involved and a fine diving header at the Kop end for Natasha Dowie. Liverpool fought valiently until the final whistle with an Arsenal side that went on to lift the cup.

When Liverpool announced the signing of Swedish star Louise Fors, a quick youtube search brought up a number of impressive set pieces. Fors wasted no time in displaying these talents at Liverpool, smashing free kicks past Lincoln and Birmingham City and brilliantly taken penalties against Everton, Bristol and Doncaster. Liverpool are lucky to have a player with Fors’ skillset amongst their ranks.

Why we play the beautiful game!! pic.twitter.com/Lz4yFsQ6DW

Liverpool leading lady scored 19 times in 21 appearences for Liverpool this term, the Liverpool of last year managed just 19 goals between the entire team.

One of the best – if not the best – centre forwards in England, Dowie’s goals come in all shapes and sizes – audacious chips, one-on-one’s, diving headers, glancing headers, powerful headers not to mention the two league hat tricks which comfortably secured her standing as the league’s Golden Boot winner. Natasha also scored her first England goal this season after earning an overdue recall to the senior squad.

A week after a humbling 3-0 defeat at home to Arsenal the reds needed 3 points away at Bristol Academy to go back top of the league.

Racing 3-1 ahead before Bristol pulled it back to 3-3, Liverpool’s inspirational captain stepped up in the final 10 minutes. The ball fell to Bonner midway through the Vixens half, letting the ball run a couple of yards in front of her she glanced towards goal before firing past Siobhan Chamberlain to win the game and take all 3 points for Liverpool. Without a doubt the most important goal of the season.

Of course the overall highlight of the season has been winning the league. Liverpool Ladies first major honour also secures first time Champions League football for the club in 2014/15.

Liverpool Ladies have been a credit to Liverpool Football Club this season and hopefully winning the league is the start of a new era for us in Women’s football!

Rachael Laws was an emergency loan signing on June’s Derby Day following injury to Liverpool’s two goalkeepers, the loan was extended during the summer until the end of the season. Produced an assured display in the 2-0 victory over Doncaster to keep the Belles out.

Lucy Bronze has been unlucky with injury over the last couple of seasons so will be pleased to have a full season under her belt. Fantastic for Liverpool on the right flank, Bronze quickly became an integral part of the side regulary providing assists and opportunites for the attacking players. Lucy was named Player’s Player of the Season and made her England debut in June.

Gemma Bonner is Liverpool’s captain, leads the team by example from the back while also popping up with a couple of important goals. Received her first senior England call-up for Euro 2013 and made an assured debut alongside Casey Stoney in September’s 8-0 World Cup qualifier over Turkey.

Whitney Engen is fast becoming renowned as of the World’s best central defenders, reads the game very well and is vocal in giving out instructions to the rest of the back line. Unfortunately for Liverpool it looks as though Engen will not be returning to Merseyside next year, although the reds are lucky to have had a player of her calibre even if just for a season.

Corina Schroder is an experienced attacking left-back who won the Champions League in Germany a couple of years ago. Like Lucy Bronze, Schroder plays more like a wing-back and has formed a good partnership with fellow German Nicole Rolser on the left wing. Scored her first and only Liverpool goal in June’s derby and set up Natasha Dowie’s 2nd goal against the blues in September.

Forming a good partnership with Fara Williams, Katrin Omarsdottir is a strong midfielder who scored 2 great goals against Bristol Academy this season – one which is nominated for Goal of the Season and the other nominated for Goal of the Month. Missed a couple of games through injury towards the end of the first half of the season but quickly fought her way back into the starting 11.

Omarsdottir’s partner in central midfield is experienced international Fara Williams who along with 3 others made the winter move from Everton. Williams scored a hat-trick on her debut in the FA Cup but was forced to wait until August for her first league goal. An essential part to Liverpool’s midfield, can control the game easily from the position she occupies for Liverpool.

A vital part to Liverpool’s attack, Louise Fors is one of the most skilled players in the FAWSL. A dead ball specialist, Fors has enjoyed a fine first season in England having previously played in Spain, Sweden and Australia. Constantly switches wings during games with Nicole Rolser making the pair hard to mark for opposition defences.

The second American in the Liverpool ranks Amanda Da Costa has a motto which she writes on tape strapped to her wrist every game – set yourself on fire. Anyone watching Da Costa this season will know she does just this, the most determined player within the squad Amanda gives 110% each game without fail. The reds vice-captain scored a brilliant goal at the Emirates Stadium to open scoring in Liverpool’s 4-0 victory in May.

Tricky German winger Nicole Rolser is the Ladies answer to Luis Suarez, impossible to mark Rolser can play on the left, the right down the centre and sometimes it seems all three at once. Grown in stature throughout the season to become an extremely important aspect of the Liverpool side, frustrates opposition defences to regulary draw fouls for free kicks in great positions.

This season Natasha Dowie has been a revalation for Liverpool, 10 goals before the break for the European Champions and 9 since propelled Dowie to the top of Liverpool and the league’s goalscoring charts. As well as scoring just under a third of all Liverpool goals Natasha’s work rate for the team is outstanding and she holds the ball up well in and around the 18-yard box to bring the midfield into the attack.

Another vastly experienced member of the squad, Becky Easton rejoined the club from neighbours Everton. Tough in the tackle and brings a wealth of experience to the team, previously won the league and The FA Cup with Everton and also has captained Doncaster Belles.

Jess Holbrook received her opportunity for a run in the starting 11 due to injury, more than proving her worth to the side and putting in great displays against Everton and Birmingham. Holbrook was unlucky not to score her first Liverpool goal when a brilliant effort crashed off the post during th 4-1 Birmingham win.

Sarah Quantrill was Liverpool’s first choice keeper until injury saw the arrival of Rachael Laws, Quantrill briefly won back her place in the side during the second half of the season. Played during Liverpool 4-0 win at the Emirates with a string of saves to keep a clean sheet.

Summer signing and New Zealand international has impressed with the opportunities given in the second half of the season, made her first start for Liverpool in the Continental Cup against Lincoln. Gregorius has also enjoyed International success this year, beating Brazil and China with New Zealand to win the Valais Cup.

Another summer signing, this time from Chelsea Ladies, Kate Longhurst gives Liverpool a different option up front. The reds No.7 scored her first goal in the 9-0 mauling of Doncaster Belles.

Sophia Riccio has made 4 appearances from the bench this season, young summer signings Katie Zelem and Ellie Stewart are yet to make their debuts. Another young Liverpool duo Sam Chappell and Danielle Gibbons have featured on the bench this year and during the summer won a Gold medal at the World University Games with Team GB.

Thankyou for reading this League Champions Review, Liverpool Ladies really have had an excellent season and we can only build on this next year. For the final home game against Bristol Academy the Ladies had a record crowd of 2,165 which no doubt enriched the atmosphere and hopefully many of those who went will return to support next year!