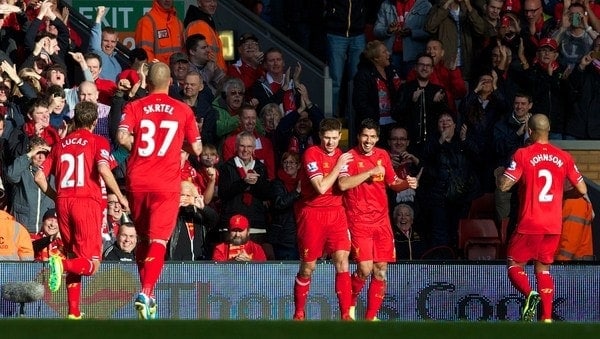 Brendan Rodgers kept with his three at the back formation, with Lucas Leiva replacing Victor Moses in the only change for The Reds.

Rodgers’ midfield consequently had much better control, with the triangle shape flipped so that Lucas held and Steven Gerrard and Jordan Henderson pressed higher up the pitch.

Henderson in particular was impressive, especially in the first-half. It was almost as though some comments this week had put his back out…

But it was up front where Liverpool were entertaining and impressive. Luis Suarez’s hat-trick was sensational, all three goals of the highest quality.

The first arrived on 12 minutes, beating two defenders, nutmegging the final man and with a very Suarez-like finish past the keeper.

5 minutes later the Uruguayan provided a stunning header from the edge of the box, an absolute bullet.

The hat-trick was completed on 55 minutes with a header from a superb Gerrard free-kick. Suarez’s sixth goal in four games this season.

There were more chances, Sturridge smashed against the cross-bar, but West Brom were given a lifeline as the linesman somewhat contentiously gave a penalty for a foul by Aly Cissokho on 66 minutes. James Morrison finished from the spot past Simon Mingolet.

Then came Sturridge’s sensational chip over the keeper on 77 minutes.

It was almost five when Suarez again hit the bar with an overhead kick.

Liverpool back up to second behind Arsenal – who they play next.