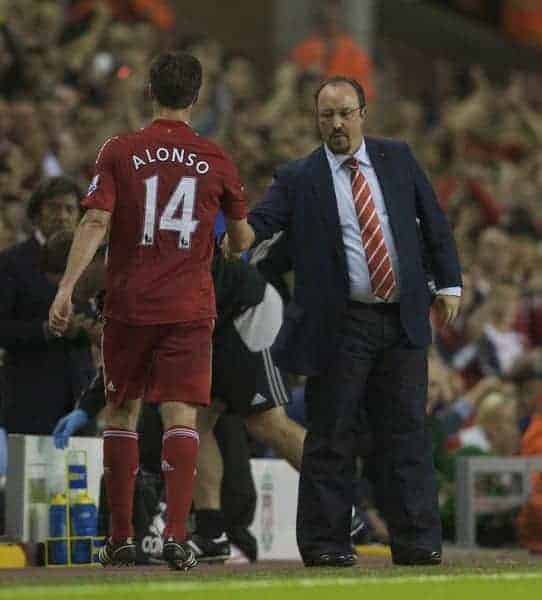 Liverpool have been blessed with some top class managers in their history, but that’s not to mean they haven’t made some shocking decisions while in charge.

Henry Jackson looks at five of the most baffling managerial decisions made by Reds bosses in recent years. The 2008/09 season was Liverpool’s best in the Premier League, and they came agonisingly close to winning the title.

Xabi Alonso had become one of the key men at the club, and was part of a great midfield trio dubbed the “best midfield in the world”, alongside Javier Mascherano and Steven Gerrard. The Spaniard was considered one of Europe’s best playmakers.

But Alonso left for Real Madrid that summer, Benitez’s flirtations with Gareth Barry the previous summer causing a seemingly irreparable divide between manager and player. Benitez tried again to sign Barry, who instead opted for Man City. Instead, injury-prone Alberto Aquilani arrived, for £17m. A year later Benitez left the club after a seventh placed finish and a season tarred by political infighting as the Gillett and Hicks era took it’s toll at Anfield.

Kenny Dalglish has done so much good for Liverpool FC it’s hard to criticise him, but his dealings in the two transfer windows in 2011 were, quite frankly, disastrous.

Having decided he wanted to sign more British players, King Kenny paid hugely over the odds for Andy Carroll (£35m in January), Stewart Downing and Jordan Henderson (both approximately £20m in the summer). These were astronomical fees for players clearly not worth that sort of money. Henderson has come on leaps and bounds but is still not worthy of that price tag, while Carroll and Downing have both moved on after very poor spells at the club.

The Reds took a 1-0 lead to Germany to face Bayer Leverkusen in the second leg of their Champions League quarter-final in 2002, thanks to Sami Hyypia’s first leg goal.

Michael Ballack’s early goal had given the German side the lead, but Abel Xavier’s priceless away goal just before half-time but Liverpool in total command. They were 45 minutes away from a mouth-watering semi-final showdown with Manchester United.

With the Reds in control, Gerard Houllier inexplicably substituted the influential Didi Hamann for Vladimir Smicer in the 61st minute. Hamann’s Germany teammate Ballack scored his second just minutes later, and the match was on a knife-edge.

Although Jari Litmanen scored to put the visitors back in control, they lacked a quality defensive midfielder to see out the game, and goals from Dimitar Berbatov and Lucio broke Liverpool hearts. It remains one of Houllier’s worst managerial mistakes to this day.

The Scot met with Michel Platini after a UEFA Cup win over Auxerre in 1991, and the French legend told him Cantona was available to sign for Liverpool. Souness declined the offer, however, citing his poor attitude as the reason for his decision.

Cantona eventually made his way to United, via Leeds, for just £1.2m, and his influence at Old Trafford was the catalyst for their dominance of English football in the 1990s. The enigmatic Frenchman is now regarded as one of their greatest ever players. Souness signed Paul Stewart instead, and he scored just three goals for the club.

DIOUF JOINS INSTEAD OF ANELKA Anelka had been signed for the second half of the 2001/02 season to help make up for the sale of Robbie Fowler to Leeds, and he fitted in brilliantly. A permanent deal looked a certainty at the end of the season, but Houllier instead opted for Diouf.

Initially, it seemed a coup. The £10m deal was struck before the Senegalese forward impressed at the World Cup. And he scored twice on his home debut against Southampton.

What do you think is the worst managerial decision in the history of LFC?