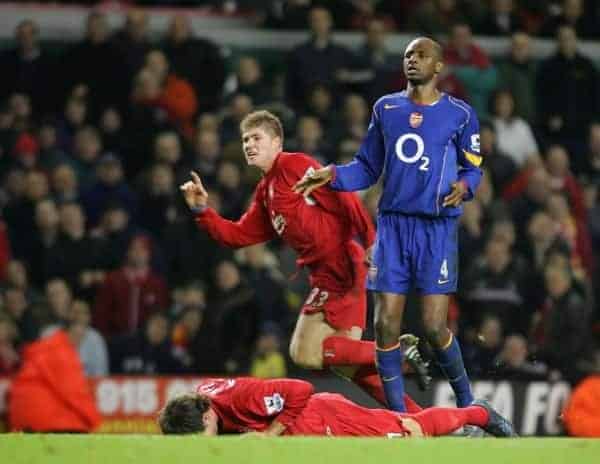 It’s nine years to the day since Rafa Benitez’s Liverpool side beat Arsene Wenger’s all-conquering Arsenal at Anfield, with the game producing both a sensational finish and an unlikely hero. Henry Jackson looks back at that unforgettable day in 2004. Arsenal‘s Invincibles arrived as hot favourites to beat Liverpool on November 28th 2004, despite having only won one of their last eight games in all competitions.

They had a fabulous array of stars on show, from Ashley Cole and Sol Campbell at the back, to the brilliant French trio of Patrick Vieira, Robert Pires and Thierry Henry. The Reds, meanwhile, had to make do with a hugely inexperienced frontline of Neil Mellor and Florent Sinama Pongolle. The odds were stacked against Benitez and his men.

A tight first half came to life in the 41st minute, with Liverpool taking the lead through a beautifully crafted goal. Steven Gerrard’s deft pass was weighted perfectly into the path of the onrushing Xabi Alonso, and the young Spaniard side footed an unstoppable effort past Jens Lehmann at the Anfield Road end.

It sent an atmospheric Anfield wild, and the scoreline remained the same as the two sides left the pitch at the interval.

Arsenal responded like the champions they were after the break, and equalised with a sublime effort of their own. A terrific passing move involving Vieira, Pires and Henry cut the Liverpool defence open, and the Gunners’ influential captain dinked the ball over Chris Kirkland to level matters.

Many would’ve predicted an Arsenal win from that point on, but that’s not how things panned out. The contest ebbed and flowed, with Gerrard testing Lehmann and Vieira fortunate not to be given a second yellow card after a pathetic dive.

With the game deep into stoppage time, and both sides looking content with a point, a loose ball fell invitingly to 22-year-old lifelong Liverpool fan Mellor, and the youngster fired a sensational 30-yard strike past Lehmann in front of the Kop.

It was sheer pandemonium as the players and fans celebrated wildly, and Mellor had written his name into Anfield folklore forever.

Liverpool would go on to win the Champions League that season, with Mellor playing a pivotal role in the famous win over Olympiakos, while Arsenal won the FA Cup. It remains the last trophy Wenger and his side won.

Although Mellor’s Liverpool career never hit the heights that many predicted, he still managed to score one of the most famous Anfield goals of all time, downing the Invincibles in the process.