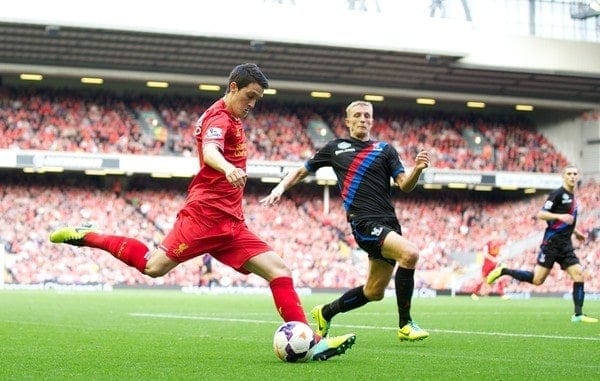 Luis Alberto knows he must take his chance at Liverpool

Luis Alberto says he understands how fierce competition for places is at Liverpool and will prepare himself to take his chance when it comes.

The former Sevilla and Barcelona B attacker has made just six appearances for the Reds since signing in the summer.

But the 21-year-old Spaniard looks to players such as Philippe Coutinho, who came to the club in January and more or less immediately claimed his place in the first team, for inspiration.

“I admire Philippe and we get on well on and off the pitch,” Alberto is quoted in the Liverpool Echo as saying.

“He can be one of the people who are an example for me. I look at many people as an example.

“Not only Philippe, but various others have said I need to be patient and work well and it will happen.

“When it arrives, then I have to show that I am good enough for Liverpool.”

Alberto’s most recent performance, aside from a two minute cameo against West Brom, came as a substitute against Newcaslte Utd last month, when Liverpool were held to a 2-2 draw at St. Jameses Park.

Since then Liverpool have continued to get results and find themselves second in the Premier League during November’s international break.

Alberto is confident and excited by the prospect of the club being in the Champions League next season.

“It gives us great confidence to have a good start, it is fantastic,” he added.

“It is an ideal moment that we have to take advantage of.

“We need to continue winning games and get to the end of the season in the highest possible place.

“The team is focused on having a good season; we have very good players and we must take advantage of this and reach our target.

“The team should focus on getting into the Champions League.”