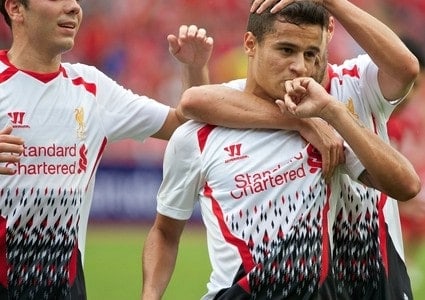 Philippe Coutinho has often been described as a “magician” and “genius”. In this superby put together video by YouTube user ‘TMBouncing’, the 21-year-old Brazilian’s based skills and tricks are showcased.

Coutinho returned to action for Liverpool last week following a month and a half on the sidelines with a shoulder injury.

The attacker played the second half of the Reds’ 2-0 defeat to Arsenal at the Emirates Stadium, before starting against Fulham in Liverpool’s 4-0 rout of Martin Jol’s side at Anfield at the weekend.

His magician-like qualities have earned him the nickname of ‘David Blaine’ from Daniel Sturridge, according to the club’s official website. When told about this nickname, a puzzled Coutinho politely replied, “To tell the truth, I hadn’t heard about that!

“If I’m not mistaken he’s a magician? David Blaine? I don’t know, I guess it’s cool for him to say that, but to tell the truth I hadn’t heard about it.”

Coutinho went on to praise is teammate and says it’s great to work with the England striker.

“He’s an excellent person,” he added. “He’s always playing around with me and the other players, and he’s fun to be around and a great player.

“Everybody on the team gets along very well when they’re off the field and I think that creates a greater union between us and makes us stronger on the field.”