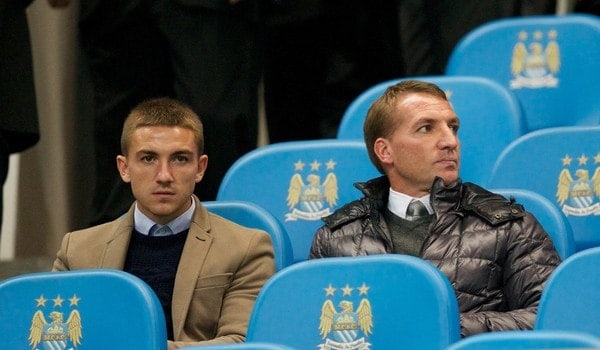 Brendan Rodgers says Liverpool will play an “aggressive, attacking game” when they face Manchester City at the Etihad Stadium on Thursday afternoon. Like Liverpool, City are in fine free-scoring form of their own, with an immaculate home record this season of eight wins from eight games.

City are the only team in the league to have scored more goals than Liverpool this season—netting 51 times, compared to the Reds’ 42 goals.

Ahead of the trip to Manchester, Rodgers told the club’s official website, “Our idea is to play an aggressive, attacking game – and that is how they play also.

“We’ll take big confidence into the game because in the two games last season, we were the better side and didn’t get the results to match the performance level because we made mistakes in the games that cost us.

“We know it’s a big task, they’ve beaten a lot of good teams this year, but we have the confidence and belief we can go anywhere and, with the nature of our game, hopefully we can go and put in a good performance.

“The game is based around confidence and if you’re confident, you have a greater chance of succeeding – that’s everything.”

Liverpool will be without full-back Jon Flanagan after the youngster aggravated a hamstring injury during the Reds’ 3-1 win over Cardiff on Saturday.

Meanwhile, captain Steven Gerrard has dismissed any ideas that Liverpool are in a title race this early in the season.

He told Sky Sports, “We are title contenders and in the title race if we’re in the title race with 10 games to go. I don’t get carried away, change targets or raise expectations around this city just because we’ve started the season very strongly and we’re in amongst it in November and December.

“To be in a title race, you’ve got to be there when there are 10 games to go with a realistic challenge of winning it. But I do have confidence and belief in my teammates that we’re capable of surprising a few people this season.”