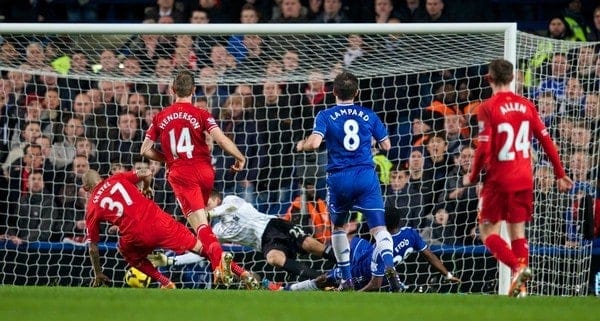 Liverpool suffered defeat after going ahead, being denied by poor refereeing decisions and Martin Skrtel being out of position – no this, isn’t a report on the defeat at Man City. Skrtel had given Liverpool the lead from close range after just four minutes, tapping in after Luis Suarez got a head onto Coutinho’s free-kick.

That free-kick was awarded after a terrible challenge by Samuel Eto’o that, somehow, referee Howard Webb didn’t even award a yellow card for.

Eden Hazard equalised with a powerful strike from the edge of the box after the ball fell luckily to him on the counter-attack.

Then Eto’o capitalised on Skrtel being caught flat-footed inside the box to poke past Mignolet from close range. The keeper perhaps should have done better but made superb saves before and after that goal.

Liverpool improved in the second half after looking tired in the first, suffering from the effects of facing Man City and Chelsea, both away, inside 3 days.

Joe Allen and Mamadou Sakho both left the pitch injured in the second half, again, the result of the fixture schedule. Sakho seemingly having pulled his hamstring.

Meanwhile, Brendan Rodgers brought on 19 year old Brad Smith for his debut but the youngster struggled to make an impression.