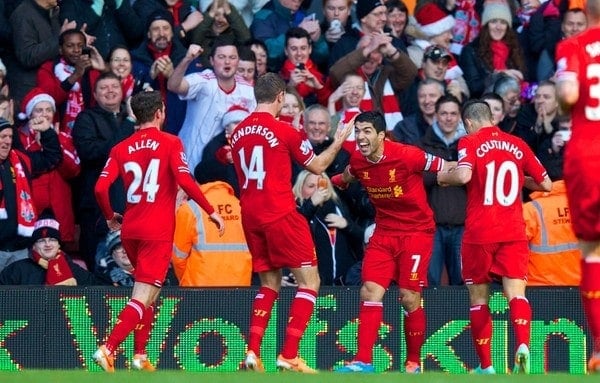 Following the exceptional 5-0 win over Spurs last weekend, a home fixture against Cardiff City was approached with a sense of great optimism, along with a measure of caution. The peaks-and-troughs nature of the Liverpool of past years has taught the beleaguered fan to not get too ahead of themselves. Therefore this – as with early December’s humbling at Hull – was always a fixture to watch out for.

However, another Luis Suarez master-class proved too much for the Welsh outfit, with Liverpool sailing away 3-1 victors.

This was not as smooth sailing as Spurs’ demolition, however. Throughout this article I will consider what can be taken from this result.

Whilst sections of the back pages were taken up by the ongoing spat between Cardiff City’s maniacal owner, Vincent Tan, and their defiant manager, Malky Mackay, build-up to this fixture was dominated by the news of Luis Suarez signing a new contract.

With a reported wage rise to £200k per week, Suarez again proved worth every penny.

Another Man-of-the-Match display capped off a performance where the Uruguayan added to his growing tally of 19 Premier League goals for the season.

Kicking off, again, as captain, Suarez also provided another assist for Raheem Sterling in a performance Brendan Rodgers described as “humble” – a testimony alluding to a growing maturity in the striker.

Jordan Henderson continued his inspiring display against Spurs with another high calibre performance.

The midfielder seems to be thriving in his Gerrard-less freedom. Deployed in a more advanced attacking role in front of the deep-lying pivot of Lucas and Joe Allen, Henderson was allowed the space to bomb forward and contribute to Liverpool’s attacks.

What could once be described as a naivety on the ball, Henderson could be seen to visualise the structure of the game, measuring his passes with authority.

Clearly relishing the added responsibility of a traditional playmaker, Henderson showcased his passing range. His skilful flick to set up Suarez’s opening volley was later trumped by a delicious through ball to set Suarez on his way to tee up Sterling for his third goal in four games.

Another player who continues to thrive in Liverpool’s good form is Jon Flanagan. Deployed once more on the left side of defence, the Academy graduate performed with confidence and restraint.
Upon his substitution in the 55th minute, Liverpool’s shape and balance was shown to markedly depreciate. This is a testament to the quality of the young defender.

His replacement, Martin Kelly, whilst obviously still finding his feet following his return from long-term injury, provided little in his role as right-back.

Furthermore, the oft-reliable Glen Johnson became marginalised as he was shifted to left-back to accommodate the introduction of Kelly. His attacking threat clearly diminishing in the second half, this allowed less support for Liverpool’s forwards.

The most important lesson Liverpool should hope to learn from this victory stems from the almost synonymous lack of a clean sheet.

The elegant displays of goalkeeper Simon Mignolet are often tarnished by conceding of cheap goals in big victories and this was once more the case, the culpable party in this instance being Martin Skrtel.

The towering Slovak, once again partnered with Sakho at the heart of defence, exhibited facets of his previously-criticised game with a shaky approach to possession, often allowing himself too much time on the ball before being forced to make a clearance as opposed to a measured pass out from defence. Furthermore, Skrtel was seen to be out of tune with Rodgers’ high line of defence, something which can be seen as the centre-back left his line to allow Jordan Mutch the luxury of being onside and unmarked to nod in Cardiff’s consolation effort.

Also in defending corners, Skrtel was highlighted to be involved in a rudimentary manhandling of his mark by television pundits. With his eye on Steven Caulker rather than the ball, Skrtel allowed Cardiff to exert a challenging presence from set pieces.

However, this does not suggest that a replacement is in order – in the form of a January recruit, or the reintroduction of Daniel Agger or Kolo Toure. More so this suggests that Martin Skrtel and Mamadou Sakho need more time to gel as a defensive partnership.

Another issue that became apparent later on in the game was the lack of options when it came to impact substitutions.

With the game petering out to a dull finale, and Cardiff often looking the more dangerous of the two following the introduction of Frazer Campbell, Rodgers could have looked to his bench to bring energy back to a flagging Liverpool side.

However, Daniel Agger was preferred to Luis Alberto, Iago Aspas and Victor Moses to provide extra cover at the back rather than added impetus to the attack.

This may suggest Rodgers’ not favouring the trio, particularly so with Aspas and Moses – both of which could realistically leave the club in the January window.

Hopefully this is a short-lived problem. With the re-emergence of Steven Gerrard and Daniel Sturridge in the months to come, Rodgers could soon look to the energetic Raheem Sterling or the influential Gerrard to provide a boost in the dying stages of a hairy bout.

Reasons to be Cheerful

Overall however, whilst this performance had its issues, it remains more important to focus on the positive nature of a fairly dominant display and another three points to add to the title challenge.

On a more salient note: what Cardiff taught us, amidst the furore of Mackay and Tan, is the importance of a sane ownership and a fully-supported manager.