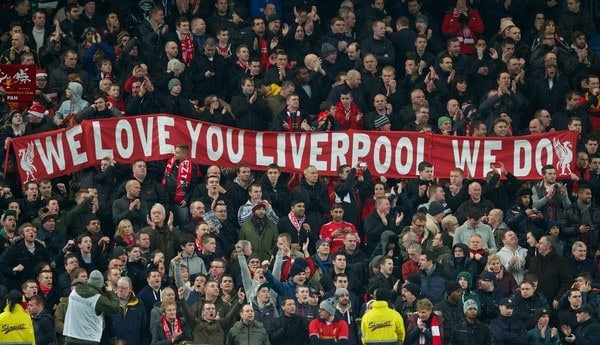 Liverpool fans have taken to Twitter to discuss the 2-1 defeat at Manchester City on Thursday evening, which leaves the Reds fourth in the Premier League. A first half strike from Philippe Coutinho was quickly turned around by City, scoring twice to take the lead before the break.

The thrilling encounter was not without controversy either—Raheem Sterling was wrongly adjudged offside in the first half, Luis Suarez should have had a penalty in the second, and Martin Skrtel was embroiled in a game-long battle with City defender, Vincent Kompany.

Liverpool will surely feel disappointed to have walked away from the game with nothing, and now turn their attentions to Sunday’s trip to Chelsea to complete their fixtures in 2013.

Here’s just a selection of tweets from some of This Is Anfield writers and other Liverpool fans in reaction to the Boxing Day defeat at the Etihad.

Let us know your post-match thoughts in the comments below, or on Twitter @thisisanfield.

We didn't get Suarez into the game enough. It was a game were we probably missed Sturridge. Take attention away from Suarez if nothing else

Lee Mason might as well put a City shirt on.

2-2 would be a fair result on game so far. Reds unlucky to be losing.

#lfc holding their heads up high tonight. Some poor defensive and midfield errors, coupled with poor officiating. We are on the right track.

Very proud of that Liverpool performance. Didn't deserve to lose and loads of positives to take from the game. Chin up reds #YNWA

Feels gutting as we should have won it, ref crowd pleasing was a disgrace. But in big picture 3 points off top & City at #LFC in 2014.

That's a real sickener. Should have got something out of that. Proud of the lads and the manager. It says alot about how far we have come.

Given how City have battered some good sides this season I was pleased with how well we handled them on the whole. We deserved a point. #LFC

Full time: #MCFC 2 #LFC 1. Excellent game. Good quality from both teams. Kompany calls it "the hardest game we've had at home so far"

Give Rodgers the right tools and he'll succeed but the squad needs more quality.