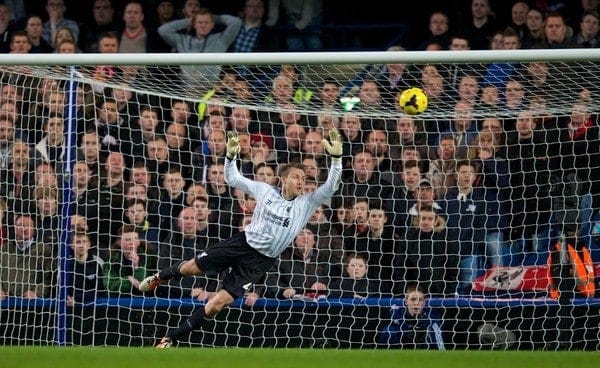 Liverpool lead the Premier League table on Christmas Day, but go into 2014 sitting in fifth place after defeats at Manchester City and Chelsea. Martin Skrtel gave the visitors a third minute lead, but goals from Eden Hazard and Samuel Eto’o turned things around for the Blues before half-time.

Despite two consecutive defeats, manager Brendan Rodgers remained upbeat about his side’s title chances, telling BBC Sport, “There’s no reason why we can’t be challenging. The most important thing for us is that we’re in the conversation.”

Reds fans have taken to Twitter to discuss the side’s performance at Stamford Bridge yesterday, and some questionable decisions by referee Howard Webb.

We’ve rounded up a few of the reactions from fans below. Let us know your thoughts on the result, and where it leaves Liverpool half-way through the campaign in the comments below, or on Twitter @thisisanfield.

We didn't play well today, but should have had a penalty & a chance to get something out the game. We weren't shocking – looked tired. #LFC.

Squad depth told in the end. Ran out of steam. Looked tired. 1 shot in the last half hour when chasing a game? pic.twitter.com/IvoPBilvRM

Time to sell Glen Johnson I think. . Awful so far this season

Allen & Sakho have been crucial to our improved performances. Pray that their injuries aren't long term

I'm more concerned about our injuries than our defeats. #LFC

I'd rather be where we are today than where we were last year.

Congratulations to Howard Webb on his transfer to Chelsea, so he can play with his best mate, Samuel Eto'o. #LFC #CFC pic.twitter.com/spEehnMbNG

Small squad – most looked tired too. Injuries taking its toll.