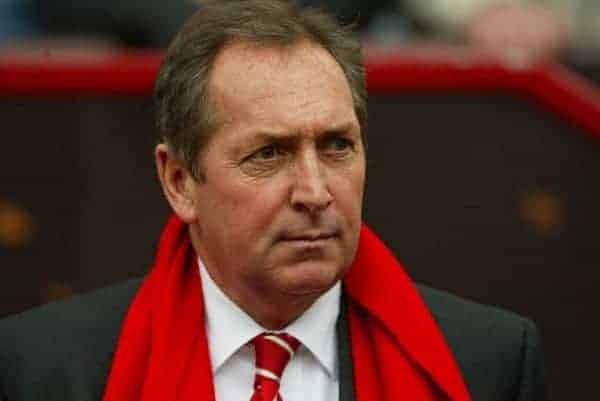 Monday marked 12 years since Gerard Houllier’s Liverpool side were named Team of the Year at the BBC Sports Personality of the Year awards. Henry Jackson looks back at their remarkable cup antics back in the 2000/01 season.

The side was built on an exceptional defensive unit, consisting of Markus Babbel and Jamie Carragher at full-back, and the outstanding partnership of Sami Hyypia and Stephane Henchoz in the centre.

In midfield, the young duo of Steven Gerrard and Danny Murphy was complemented by Dietmar Hamann and Gary McAllister. Patrik Berger, Vladimir Smicer and Nick Barmby in reserve highlighted the strength of the squad, especially with captain Jamie Redknapp injured too.

The English trio of Robbie Fowler, Michael Owen and Emile Heskey all offered something different in attack, while the signing of Jari Litmanen in January 2001 was very shrewd.

Many expected the Reds to push for a top three finish in the league, and it was secured on the final day of the season thanks to a 4-0 win at Charlton. It was in the cup competitions that Liverpool were truly unstoppable, however.

Having disposed of Chelsea in the 3rd round, the Reds romped to an 8-0 win at Stoke, with Fowler bagging a hat-trick. They beat Fulham at Anfield in the quarter-finals, before facing Crystal Palace in the semis.

Having lost the first leg 2-1 at Brammal Lane, Liverpool cruised to a 5-0 win at Anfield. Goals from Smicer, Murphy and Igor Biscan had the game won 18 minutes in.

The final saw the Reds face Birmingham City. Fowler’s stunning opener looked to have won it, but Darren Purse’s last-gasp penalty took the game to extra-time and spot-kicks.

Liverpool prevailed 5-4 in the shootout, with Andrew Johnson the unfortunate villain for Birmingham.

A routine with over Rotherham United was followed by a late away win against a strong Leeds side, thanks to Barmby and Heskey.

They then beat Manchester City 4-2 at Anfield, before a quarter-final with local rivals Tranmere Rovers. Another 4-2 win was secured, thanks to goals from Murphy, Owen, Gerrard and Fowler.

Wycombe Wanderers were the opponents in the semi-finals at Villa Park, and Heskey and Fowler sent Liverpool through to face Arsenal after a 2-1 win over the lower league minnows.

Although the Reds were being dominated by Arsene Wenger’s side on the day, Owen turned the game on its head after Freddie Ljungberg’s opener. The young Englishman scored twice to secure an incredible win, earning them the domestic cup double in the process.

Liverpool breezed to the fourth round, where they faced Roma over two legs. Owen’s brace in Rome gave them a historic 2-0 win and, although they lost the return game 1-0 at Anfield, the Reds were still through to the last-eight.

Porto were up next, and a 2-0 aggregate win was secured thanks to strikes by Owen and Murphy.

The mighty Barcelona stood between Liverpool and yet another final, with players like Rivaldo, Pep Guardiola and Luis Enrique at their disposal. A stalemate at Camp Nou meant a win would see Liverpool progress, and McAllister’s penalty was the difference on the night, at a deafening Anfield.

Alaves were the opponents in the final, with Houllier and his team just one game from a colossal achievement.

Babbel and Gerrard put them 2-0 up in no time, Ivan Alonso reduced the deficit before another McAllister penalty gave Liverpool a 3-1 half-time lead. A Javi Moreno double levelled matters, before Fowler looked to have sealed victory with a fine solo effort in the 73rd minute.

Jordi Cruyff incredibly made it 4-4 to take the game to extra-time, before Delfi Geli’s famous own goal, from McAllister’s free-kick from out wide, clinched an astonishing win for Liverpool.

It was an unforgettable night, and one that summed up an incredible season for Houllier and his side.