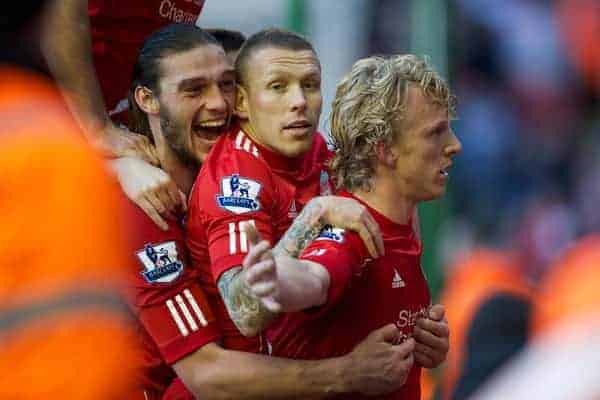 Henry Jackson (@OnFootballTweet) takes a trip down memory lane to look back at some great FA Cup 4th Round wins over the years. What’s been your favourite? Liverpool gained revenge over their bitter rivals back in 2012, after United had knocked them out in the 3rd Round a year earlier.

Kenny Dalglish’s side took the lead when Daniel Agger headed home Steven Gerrard’s corner in the 21st minute, before Ji-Sung Park levelled matters with an emphatic finish before the break.

With the game heading for a replay at Old Trafford, Dirk Kuyt, on as a substitute and known as a man for the big occasion, capitalised on some poor defending by Patrice Evra to fire home the winner in front of the Kop.

Fratton Park had been a bad ground for Liverpool two years previously, when the Reds were knocked out of the FA Cup after a 1-0 defeat. Rafa Benitez’s side made amends this time though.

Sean Davis pulled a goal back for the hosts in the second half, but Liverpool held on. They would go on to win the competition that season, beating West Ham in a thrilling final.

Bruno Cheyrou has to go down as one of the most disappointing signings in Liverpool’s recent history, but he was the hero against Newcastle a decade ago.

A superb start to the game saw Cheyrou finish off an excellent Liverpool move, before Laurent Robert equalised almost immediately with a terrific free-kick. The game ebbed and flowed, before Cheyrou settled matters.

The 25-year-old Frenchman timed his run into the box perfectly in the 61st minute, heading home Gerrard’s inch-perfect cross to send his side through.

At this point Leeds were a fearsome side; one of the best teams in the country at the time. This was seen as a very tough game for Gerard Houllier’s men, and their victory on the day was one of their most impressive FA Cup results in years.

With the game deadlocked at 0-0 and just minutes remaining, substitute Nick Barmby finished from close-range after Robbie Fowler’s effort had come back off the post. Emile Heskey thundered home a second to put the icing on the cake, in front of the delirious Liverpool fans.

Liverpool would clinch the title on the same ground a few months later, with Kenny Dalglish scoring a memorable winner, and they got the better of Chelsea in this FA Cup clash too.

Ian Rush gave the Reds the lead on the stroke of half-time with a good finish, before Mark Lawrenson got a second soon after the interval.

David Speedie scored to make it a nervy last 20 minutes or so for the hosts, but they held on. They won the FA Cup that year after beating Everton in the final, completing the league and cup double in the process.

What’s your best FA Cup 4th Round memory as a Liverpool fan? How far will the Reds go this year?