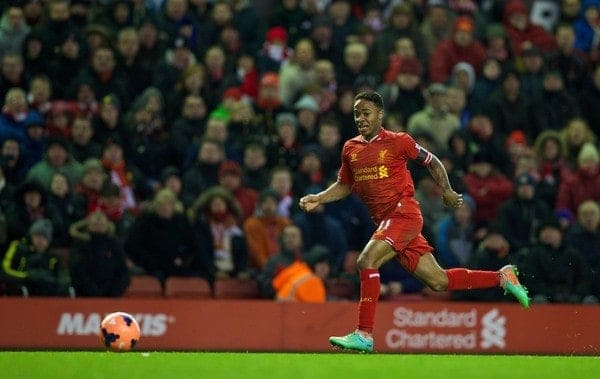 Raheem Sterling says Liverpool players were told by Brendan Rodgers to get their mentality right at half-time during Liverpool’s FA Cup Third Round tie with Oldham at Anfield on Sunday afternoon.

After a poor first-half’s football from the home side, they came to life in the second, eventually sinking the Latics 2-0 thanks to goals from Sterling, and before him, Iago Aspas.

Manager Rodgers also made two substitutions at half-time, bringing on Philippe Coutinho and Lucas for Victor Moses and Luis Alberto to inject some intensity into the game.

Having been dumped out of the FA Cup at the Fourth Round stage by Oldham last season, Rodgers was wary of his players faltering to the same mental blow again.

“The manager told us to get our mentality right for this game because we knew what defeated us last time [against Oldham],” Sterling told the club’s official website.

“His message at half-time was that we needed to move the ball a lot faster and get them working and chasing the ball. That’s what we did second half, and we got the two goals which gave us the win.

“Stevie gave me the ball and I knew I had to take the guy on. I got half a yard on him and crossed it in. It was a great finish, the ball was behind him a bit, but he found the bottom corner and it was a great goal.”

Sterling was one of Liverpool’s better performing players in the game, and is continuing to grow in confidence game by game.

6 – Raheem Sterling has scored three and assisted three in his last eight appearances for @LFC in all competitions. Blossoming. #FACup

The 19-year-old winger was also delighted for Spaniard Aspas, who netted his first Liverpool goal during the game, turning home Sterling’s excellent cross from the right side on 54 minutes.

“It will give him a big boost,” added Sterling. “He comes in and every day in training he’s scoring goals and creating chances. So today was a great opportunity for him and he’s scored, so hopefully that will give him a massive boost for the next chance.”

Liverpool will play the winner of Bournemouth vs Burton Albion in the Fourth Round of the competition on the weekend of 25/26 January 2014.

Bournemouth and Burton Albion will have a second attempt at playing their Third Round tie on Tuesday, 14th January 2014, after adverse weather conditions on the South Coast cancelled the original fixture on Saturday.