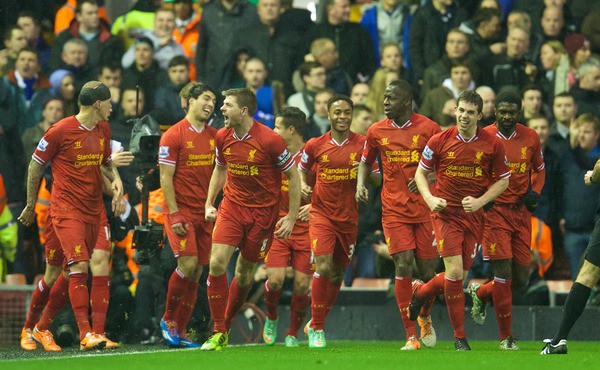 Liverpool are magic, Everton are tragic

“Liverpool are magic, Everton are tragic” mocked The Kop as Brendan Rodgers’ side hammered their neighbours from across the Park.

It was Emlyn Hughes who coined the phrase he celebrated the 1977 European Cup and it was used frequently in the following decade, not least when Liverpool ran riot to win 5-0, with Ian Rush scoring four.

This night almost produced a similar result, it would have been five had Daniel Sturridge taken either of the two opportunities he had to claim a historic Merseyside derby hat-trick.

By that point, the England man had already made it 29 goals in 29 Premier League goals since joining the club, scoring twice inside two minutes as Liverpool ruthlessly cut Everton apart on the counter attack.

Brendan Rodgers named the same starting eleven as he did for the last home match against Aston Villa, but employed differing tactics, learning from the mistakes.

Sturridge and Luis Suarez interchanged roles from playing as the centre forward and the wide forward on the left, which left Everton‘s defence unsure of which one to pick up.

Liverpool sat deeper, allowing Roberto Martinez’s side possession in areas that didn’t threaten, but then countered with ruthless efficiency at every opportunity.

Steven Gerrard put a superb, captain’s performance, Philippe Coutinho had his best performance of the season by some distance, Sturridge – despite his penalty miss – was superb, and Suarez was his ever energetic, driven, passionate, clinical, creative self.