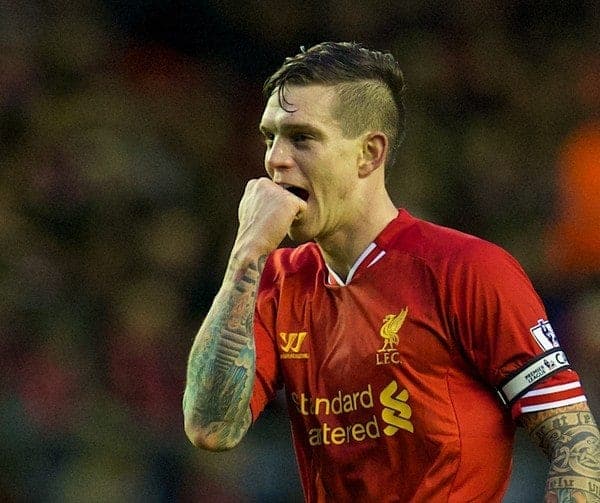 A first half header from Daniel Agger and second half free-kick screamer from Luis Suarez earned Liverpool three points in their New Years’ Day encounter with Hull at Anfield. Liverpool went into the game off the back of two consecutive defeats between Christmas and New Year at Manchester City and Chelsea, leaving them fifth in the Premier League.

With Joe Allen and Mamadou Sakho having picked up injuries during Liverpool’s 2-1 defeat at Chelsea last month, Iago Aspas and Aly Cissokho came into the starting line-up.

Steven Gerrard was named amongst the substitutes for the first time since picking up a hamstring injury against West Ham in December.

The game took a while to get going with a sluggish, slow-paced New Years’ hangover feel to it. Aspas looked pysically weak and struggled to get into the game, whilst Luis Suarez had many moments of frustrations, with himself, his teammates and referee Craig Pawson.

Liverpool finally took the lead, which they would take into the break, on 36 minutes when Daniel Agger rose to crash home a strong header from Philippe Coutinho‘s corner.

Five minutes into the second half Liverpool looked to finish off their opponents when Luis Suarez expertly hit home a free-kick from just outside the box.

In another masterclass of the Uruguayan’s brilliance, Suarez rocketed an unstoppable shot into the left-top-corner, leaving Allan McGregor in the Hull goal with no chance.

Stunning from the 26-year-old.

The second half saw the introductions of Kolo Toure, Gerrard and Victor Moses as the Reds held strongly onto their lead.

Coutinho had several chances to add a third for Liverpool, but a succession of shots sailed high, wide and saved.

It was Liverpool’s first 2-0 win under Brendan Rodgers.

The result moves Rodgers’ side back up to fourth in the league, with Everton having drawn 1-1 at Stoke City.

Elsewhere, there were wins for Arsenal, Chelsea and Man City.

Next up is the visit of Oldham Athletic in the third round of the FA Cup on Sunday afternoon (kick-off 3pm), before the league trip to Stoke on Sunday, 12th January.