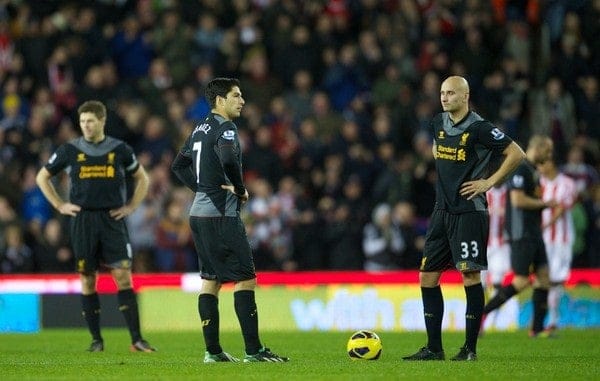 Liverpool FC’s last 5 trips to Stoke: Can the Reds break the curse?

Liverpool are yet to win at the Britannia Stadium in the Premier League, and they will hope to end that jinx on Sunday. Henry Jackson looks back at the last five league encounters there.

The most recent clash between the two sides at the Britannia Stadium was a disastrous one for the Reds, yet it started so well.

Steven Gerrard converted a very penalty to put the visitors in front, after Luis Suarez had been fouled by Ryan Shawcross. The lead lasted just three minutes, however, as Jon Walters equalised for Tony Pulis’ side.

Kenwyne Jones then headed the home side in front after just 12 minutes, and a lightweight Reds side simply never looked like getting back in the game. Walters scored again after half-time to rub salt in the wounds, on a miserable Boxing Day for Brendan Rodgers and his side.

With Kenny Dalglish at the helm Liverpool were showing signs of improvement, but not even the Reds legend could prevent another defeat to Stoke. It was their first league defeat of the season.

The game was settled by Walters’ first-half penalty, awarded after Jamie Carragher was adjudged to have fouled the Republic of Ireland international.

Suarez and Jordan Henderson both had golden opportunities to rescue a point for Liverpool, but both fluffed their lines.

Roy Hodgson’s beleaguered side produced another limp effort against a typically physical Stoke side, as the now England manager edged nearer his Anfield exit.

Ricardo Fuller gave the hosts a deserved lead shortly after the break, poking home after Liverpool failed to clear the ball. A poor game was given its finishing touches by Jones, who finished clinically.

There was still time for Lucas to receive a second yellow card, and the defeat left the Reds 11th in the Premier League table. Hodgson was sacked shortly after.

For so long this looked as though Liverpool would pick up a much-needed three points at a very tough ground to visit, only for late drama to thwart Hodgson’s men.

Greek defender Sotirios Kyrgiakos had given Liverpool the lead in the 57th minute, bundling the ball home after a mistake by Thomas Sorenson.

In the dying seconds, however, Robert Huth pounced from close-range to level the scores. There was still time was Dirk Kuyt to hit the post, but the game finished honours even.

Although this point back in 2009 took Liverpool back to the top of the Premier League table, it was yet more dropped points that would, ultimately, cost them the title at the end of the season.

Rafa Benitez’s side were poor on the day, and were probably fortunate not to lose the game. They lacked an attacking threat throughout, and Rory Delap struck the woodwork.

Gerrard could actually have snatched the win late in the day, firstly hitting the bar with a free-kick in the 84th minute, then a post in stoppage time. It would’ve been undeserved, though.