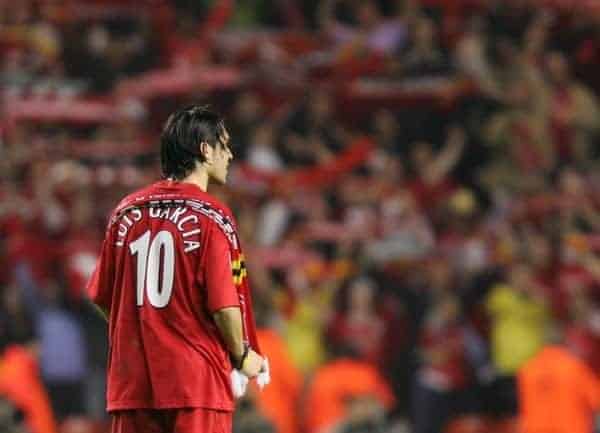 The Champions League-winning former Red announced his retirement today, at the age of 35. Henry Jackson (@OnFootballTweet) takes a look back at the diminutive Spaniard’s top 5 goals in a Liverpool shirt.

Garcia had only been at Liverpool for a couple months, having signed from Barcelona in the summer of 2004, when he unleashed this thunderbolt to defeat a stubborn Charlton side.

Jon Arne Riise’s opener was still the difference between the two sides with just 16 minutes left, before the former Spain international struck. He picked the ball out 35 yards from goal, carried it a few yards before rifling a right-footed into the net.

It was his first goal in front of the Kop, and it wouldn’t be his last.

This was a win that saw Liverpool edge closer to the knockout stages of the Champions League, and Garcia’s goal was the standout moment in a resounding Reds victory.

Although fairly small in stature (5″9) Garcia was always good in the air, and his header against the Belgian side was majestic. He met Steve Finnan’s cross brilliantly, guiding a long-range effort into the far corner of the net.

It was one of 11 Champions League goals he scored for the club.

It may have been one of the ugliest goals Garcia scored in his three years at the club, but it was easily the most important.

Jose Mourinho’s Chelsea arrived for the Champions League semi-final second leg as the new Premier League champions, and they were brimming with arrogance.

The first leg had been a tight 0-0 draw, but the return game got off to a remarkable start. Just four minutes in, Garcia pounced on a loose ball, after Milan Baros had been fouled by Petr Cech, to scramble the ball home.

Nobody will ever know if the ball crossed the line or not, but the goal was given and it was enough to send Liverpool through to an unforgettable final against AC Milan.

The Liverpool-Chelsea, Benitez-Mourinho, Gerrard-Lampard rivalry of the mid 2000s saw another fascinating tussle take place in the 2006 FA Cup semi-final. Again it was Garcia who had a major say in the outcome of the game.

Riise had given the Reds a 1-0 half-time lead at Old Trafford, before Garcia scored a vital second. He collected a bouncing ball, teed it for himself, before firing a wonderful half-volley past the motionless Cech.

Chelsea got a late consolation, but Liverpool were through to the final, which they won against West Ham.

There can be absolutely no question that this was the best goal Garcia ever scored for Liverpool.

With Liverpool already leading thanks to Sami Hyppia’s opener, the ball dropped to Garcia 30 yards out slightly to the right. The Spaniard, then 26, hit an unstoppable volley past Buffon, the world’s best goalkeeper at the time.

Anfield has rarely been louder, and Garcia’s goal rivalled Steven Gerrard’s against Olympiakos as the best of that season in the Champions League. They eventually went through 2-1 on aggregate, with Garcia all set to break Chelsea hearts in the semi-final.

What is your favourite Luis Garcia goal?