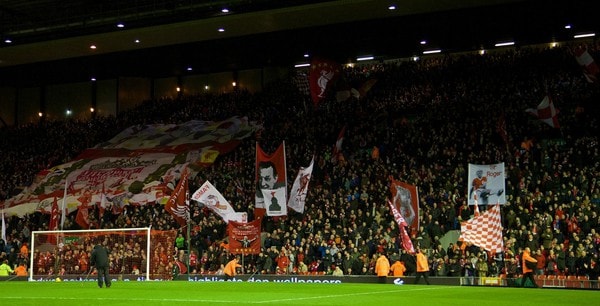 The most talked about topic on Twitter on Tuesday night was Liverpool’s 4-0 thrashing of Everton in the 222nd Merseyside derby at Anfield. On an epic night for the Red half of the city, goals from Steven Gerrard, Daniel Sturridge (2) and Luis Suarez sank Roberto Martinez’s Toffees to their worst derby defeat in over 30 years.

It could well have been more too, but for some missed chances and Sturridge missing a second-half penalty which would have completed his hat-trick.

Around the ground, the atmosphere was superb — surely the best in several years, as a renewed optimism rang around Anfield.

That optimism and spirit was echoed in tweets before, during and after the match — fans buzzing from beating the local rivals so convincingly.

We’ve rounded up 20 of the best tweets from the match, which paint a picture of how passionately Liverpool fans see this victory, which moves Brendan Rodgers’ side four points clear of the Blues in the Premier League table.

The city is all ours…! #LFC #EFC pic.twitter.com/HX68pONg2r

VIDEO: Full Match Liverpool vs Everton in case you missed it or want to see it again….. http://t.co/vS4i012UaJ #LFC

Waw… Thanks lads, it was so loud I could hear The Sangria song from home.#YNWA

Photo: A night to remember at Anfield… #LFC pic.twitter.com/ukM7GaNEhK

Our @MirrorSport back page Sturridge hammers the Toffees and then apologises. Funny old game! http://t.co/qhN4TGALA1 pic.twitter.com/CuWmdGw6cy

There's going to be a lot of sickies pulled tomorrow. I'd give them compassionate leave.

Liverpool are magic, Everton are tragic.

That´s the #MerseysideDerby we all dreamed about. Keep fighting!! #LFC #YNWA pic.twitter.com/7YwNYLqfs9

Great result for Liverpool well done @D_Sturridge on the goals and great comeback to get the win from us tonight never give up!

Hope all the Lfc fans are having a good night tonight! Make sure if anyone is out no violence. #myfeetareup #cupofwhitetea #redordead #peace