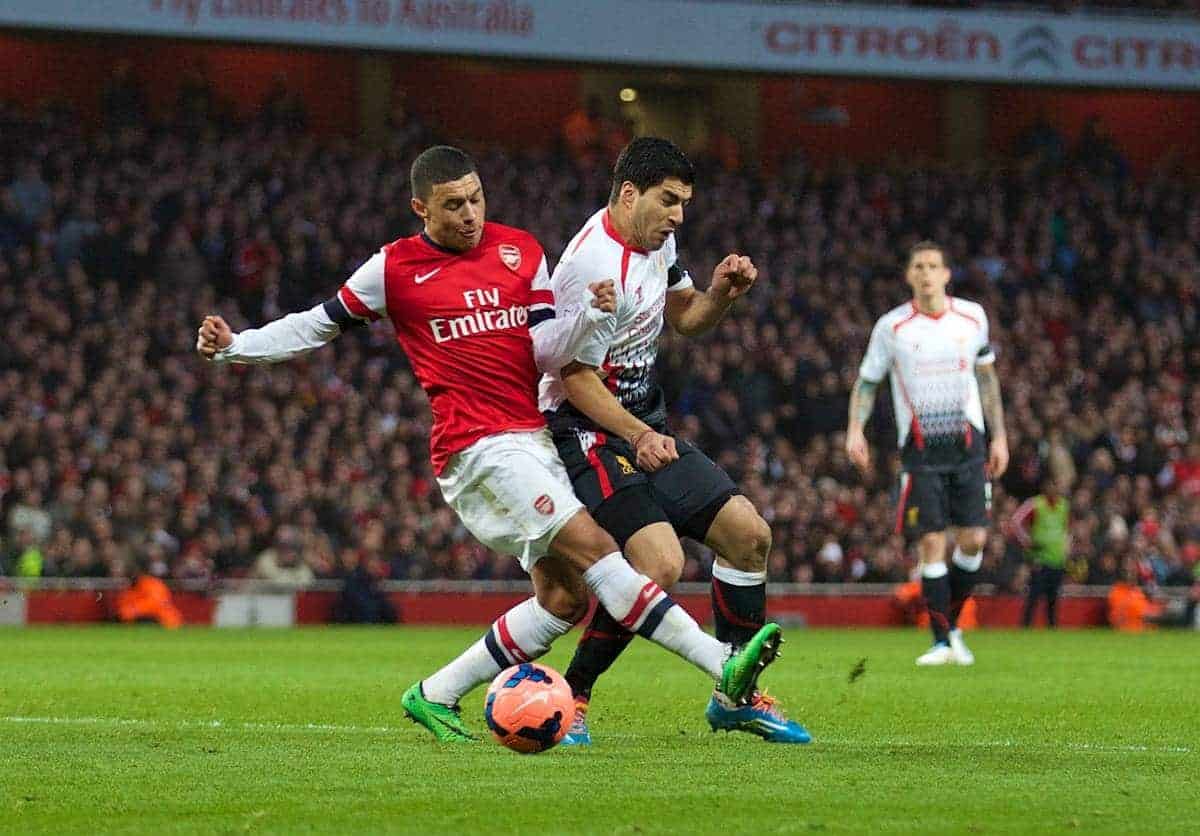 Despite a valiant performance, Liverpool were left ruing a clear-cut second-half penalty appeal as they crashed out of the FA Cup, going down 2-1 at Arsenal on Sunday afternoon.

Before the match, there was a minute’s silence for Sir Tom Finney, which broke out into applause and song — both sets of supporters showing respect for the former Preston and England forward.

Daniel Sturridge wasted two good chances inside the first five minutes as Liverpool started brightly, but it was Arsenal who took the lead on 16 minutes.

Mesut Ozil’s cross fell to Yaya Sanogo, who’s shot was bravely blocked by Steven Gerrard. The ball dropped to Alex Oxlade-Chamberlain in space, who slotted home from 10 yards out.

Both sides had good spells of possession before the half was out, and Luis Suarez forced a save from Lukasz Fabianski shortly before half-time.

Raheem Sterling had a ticking off from referee Howard Webb on the stroke of half-time when the 19-year-old reacted badly to a decision.

Suarez started the second-half with a superb turn and run into the area, which brought about another good save from Fabianski. It was Arsenal though that would strike next.

Oxlade-Chamberlain’s pace down the right left Agger chasing and his low cross to Lukas Podolski was expertly put away by the German for the Gunners’ second of the afternoon.

Suarez had a dangerous shot on 54 mintues, whipping the ball just over from the edge of the area, but he cast a frustrated figure as the game went on.

Sturridge forced a save from Fabianski minutes later as Liverpool responded to conceding the second goal brightly.

The Reds were rewarded for their pressure when Gerrard scored from the penalty spot just before the hour mark after Suarez was brought down by Podolski in the area.

Liverpool should have had a second penalty just minutes later when Suarez was brought down by Oxlade-Chamberlain inside the area following a Suarez free-kick that went into the wall. Webb was perfectly positioned for the incident, but bottled it, waving play on.

But whilst Liverpool may feel frustration at not being awarded a penalty, Gerrard was lucky to stay on the pitch with a possible second yellow card for his late foul on Oxlade-Chamberlain.

Rodgers’ side were left to rue missed chances in both halves, and it is Arsene Wenger’s men who will face Everton at home in the sixth round of the competition.

Liverpool now turn their attentions back to the Premier League, with a home game against Rodgers’ and Allen’s former club Swansea City next Sunday, 23rd February 2014.

SG G vs AFC by LFCmostar

Uncalled Penalty on Luis by LFCmostar