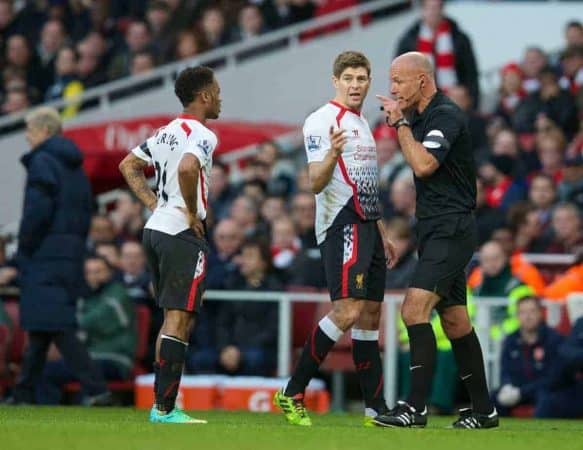 Sterling’s rise to indispensable first-team player has been a very exciting feature of Rodgers’ first year and a half at the club.

The England Under-21 international has made 21 appearances in the Premier League for the Reds this season, including starts in the last 14 — and he’s still only 19-years-old.

Speaking to the club’s official website, Gerrard said Sterling’s pace and power is leaving the rest of the squad for dead, whilst urging the teenager to continue his footballing education.

“I don’t go near him in training because if I do, there is only one winner,” said Gerrard. “He’s the toughest in our squad.

“He just needs to keep learning and listening to Brendan Rodgers and the experienced players in the dressing room and believing in himself. If he does that, he’ll be all right.”

Gerrard was called in by referee Howard Webb during Liverpool’s 2-1 defeat at Arsenal last Sunday when Sterling made contact with the referee following an argument over a first-half decision.

Role-model Gerrard added that he is challenging Sterling to give his best performance in every game.

The skipper said, “I said to him before we played Everton, ‘put yourself in the full-back’s position – what doesn’t he want? He doesn’t want you to keep running at him’.

“Raheem was relentless that night. He kept going and going. He gave the Everton full-backs a torrid afternoon and he did it to Arsenal.

Sterling will be hoping he impresses England boss Roy Hodgson enough to earn himself a call-up to the senior team for this summer’s World Cup.

With Arsenal’s Theo Walcott missing through injury, Sterling’s chances of playing in Brazil are very much alive.

Earlier this week, Jack Lusby wrote a good piece on This Is Anfield regarding the club’s English contingent and their hopes for the World Cup.