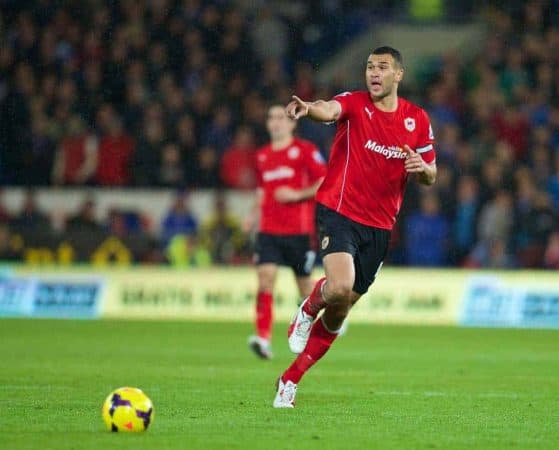 Liverpool are expected to make a move for Cardiff City captain Steven Caulker in the summer, according to The Telegraph.

With speculation suggesting Daniel Agger may be moved on by Liverpool in the summer, 22-year-old Caulker could be seen as the long-term central defensive partner for Mamadou Sakho in the summer.

Matt Law of the The Telegraph writes on Friday:

It is believed the Anfield club’s summer transfer policy is likely to be affected by whether or not the club qualifies for next season’s Champions League.

While Rodgers is a fan of Caulker, it is unclear whether the Liverpool transfer committee will be as keen on a deal for him.

With Cardiff languishing in 19th place in the Premier League, amongst the relegation dog fight, Brendan Rodgers will be confident of landing the former Tottenham player.

Furthermore, Rodgers took Caulker on loan from Spurs in the 2011/12 season. Caulker made 26 appearances in the Swans’ first season back in the top flight.

Caulker’s rejuvenated performances for Cardiff since his £8 million move from White Hart Lane last summer have seen him earn a call-up to Roy Hodgson’s England squad this week.

Should he play against Denmark at Wembley next week, it will be his second cap for the national team. He made his debut in a friendly against Sweden in 2012, in which he scored.

Liverpool’s defence has seen many shifts in personnel this season, due to injuries.

The Reds are hopeful that £18 million signing Sakho will be available for first-team action soon after recovering from the hamstring injury he picked up at the end of 2013.

Would you like to see Steven Caulker at Liverpool? Let us know your thoughts on this potential signing and where you think he’d fit in at Anfield in the comments below, on Twitter @thisisanfield or in our forums.