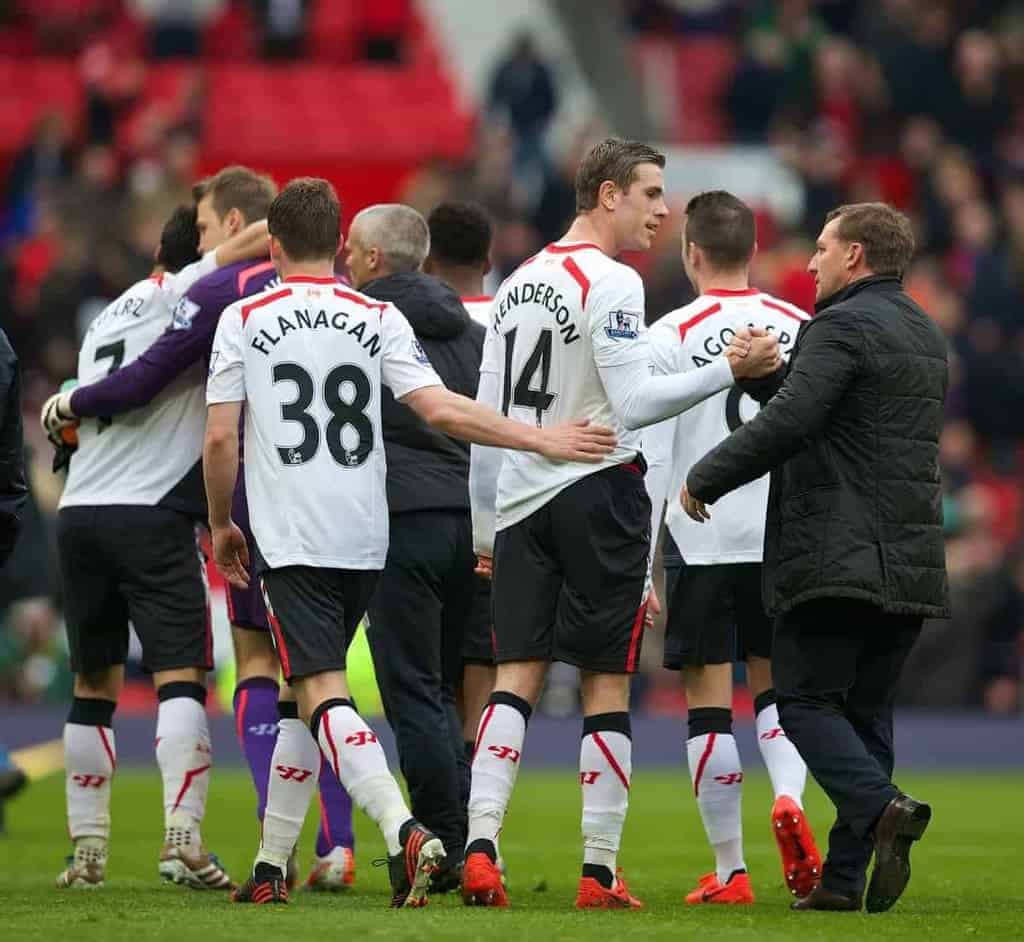 With Liverpool’s next fixture coming away to Cardiff City at the Cardiff City Stadium this Saturday, Jack Lusby (@LusbyLatest) looks at the key areas Brendan Rodgers needs to focus on in preparation.

Following a pair of comfortable 3-0 away victories at Southampton and Manchester United respectively, Liverpool find themselves positioned conclusively in the race for the Premier League title, with nine games to go this season every point is vital.

In the last ten games Liverpool remain undefeated; eight of these were wins, with the Reds taking the full three points in each of the last five games.

The Anfield club’s next fixture represents somewhat of a breather on paper, with Cardiff City sitting in 19th in the Premier League table, taking 25 points from 30 games; however, it would be imprudent for Rodgers to take his once-rivals lightly.

Unfortunate to concede a last-minute winner in their last match, a 2-1 loss away to Everton, Cardiff would have been looking to build on an impressive win against their relegation rivals Fulham the previous weekend; the main man in that contest was centre-back Steven Caulker.

An adept defender, Squawka attributes Caulker with a 55 percent success rate in the tackle, 60 percent of headed duels won, and an average of 12 defensive actions per game; the Englishman is also yet to make a defensive error this term.

The main threat caused by Caulker in the Fulham game however, was his ability to get on the end of crosses. Finishing the game with two goals, an impressive feat for a centre-back, Caulker could well pose a threat to a Liverpool defence which often baulks when it comes to defending crosses.

According to Squawka, in the last five games Mutch and Eikrem have created 11 and 10 chances respectively, a statistic made even more impressive considering neither have featured consistently during that period – Mutch missed one game, whilst Eikrem has featured in three.

To put things into perspective, only Liverpool’s Luis Suarez (14) has created more than Mutch in the same period, whereas Eikrem is joint with Daniel Sturridge and Phillipe Coutinho.

With Cardiff likely to look to get the ball down and play, Rodgers will be astute to take care of these two playmakers.

Hugely impressive in the last two games as part of a consistent back-four, Liverpool’s Danish warrior could be considered key once more in this fixture.

As mentioned in my Manchester United post-game piece here, the Reds are now benefiting from keeping the same back-four in games, having kept consecutive clean sheets now for the first time since the beginning of the season.

Agger is Liverpool’s best defender in terms of aerial duels – as per Squawka, winning 71 percent – and Rodgers would be wise to utilise his vice-captain to counter the threat posed by Steven Caulker.

However, with Cardiff City a less-imposing fixture on paper than in recent weeks, the Northern-Irishman may look to reintroduce his most prodigious of defensive talents, the now-fit Mamadou Sakho, as a means of easing the Frenchman back into competition.

Rodgers’ trusted midfield signing Allen continued his resurgence in form when included as part of a midfield diamond against Manchester United.

Utilised to flood the midfield and break up play, Rodgers may consider continuing the Welshman’s run in the first-team to counter the creative threat of Mutch, Eikrem, and another midfielder, Peter Whittingham.

According to Squawka, Allen is Liverpool’s most effective midfielder when it comes to defensive situations – often in a positive sense further up the pitch – having won 56 percent of tackles attempted; the diminutive charge also boasts a 74 take-on success rate.

Whilst they haven’t proven to be the most effective so far this season, Cardiff City do possess a selection of mercurial talents on the flanks with the likes of Wilfried Zaha, Craig Noone and Kim Bo-Kyung.

To counter this projected threat, Liverpool’s local-lad Jon Flanagan may once again prove key as the Reds plot another win.

Again, as per Squawka, Flanagan was in imperious defensive form against Manchester United: the full-back won eight tackles and was second only to Martin Skrtel with eight defensive actions.

Just as Steven Gerrard enthused in this now immortal post-match interview, focus on getting these key defensive areas right against Cardiff City and Liverpool’s attacking prowess in the form of Suarez and Daniel Sturridge should do the rest.

Prior to the Cardiff game, Rodgers will have to decide whether to stick with Agger in the centre of defence and favour consistency, or plump for the supremely talented Sakho in an attempt to push match fitness.

In my opinion for the reasons detailed above, Agger should maintain his place.

Elsewhere, the Northern Irishman can effectively only choose two of Allen, Coutinho and Raheem Sterling. Again, as mentioned above, Allen would adeptly counter any threat posed by Cardiff in the centre of midfield; Coutinho impressed in his substitutes appearance against Manchester United but remains hit-and-miss when it comes to away encounter, whilst Sterling was supreme as ever.

Therefore, in my opinion, I would again stick with Allen and Sterling; Coutinho can again be introduced from the bench.

Do you agree with our selections? Should Rodgers stick with his winning XI or experiment in what should be an easier fixture? Let us know in the comments below.