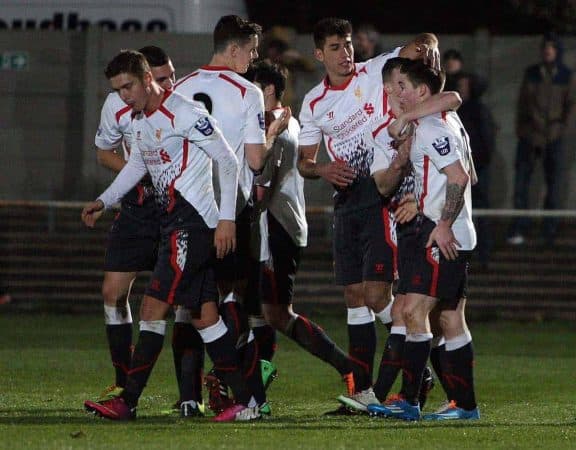 Adam Griffies (@whatahitsonlfc) was on hand for us on Friday evening to see if Liverpool’s young starlets could respond to defeat to Reading on Monday.

Liverpool Under-21s travelled to London to take on West Ham earlier tonight at Grays Athletic’s Rush Green Stadium, as Alex Inglethorpe’s side looked to bounce back from Monday’s 2-1 home defeat to Reading.

Due to the lack of senior fixture this weekend, the young Reds were joined by established first-team players Mamadou Sakho and Lucas Leiva, who both started the game as they looked to gain some vital competitive match practice after relatively lengthy absences through injury.

Joao Carlos Teixeira, who impressed on his senior debut at Fulham last month, was also handed a start. The Portuguese attacking midfielder, in fact, went into the match as the Reds’ Under-21s’ top goal scorer this campaign.

The Reds started the game on the front foot, with Brad Smith going on a lung-busting run from left-back; the Australian sent his shot into the side-netting though.

Lucas looked relatively lively, controlling proceedings from a central position behind Jordan Lussey and Cameron Brannagan; similar to the regista role Steven Gerrard is currently playing in the first-team.

As the half wore on, both sides seemed to struggle to find any sort of rhythm, with West Ham only threatening occasionally from long balls and set-pieces into the Liverpool box. Allardyce will have been glowing with pride.

Liverpool, aided by the presence of Mamadou Sakho, dealt well with any aerial danger though. The French international, Sakho, looked strong and assured, putting in a typically unforgiving and thunderous block as West Ham forward Elliot Lee tried to get a shot away from the edge of the box in the 35th minute.

On the stroke of half-time, Liverpool perhaps fortuitously took the lead, thanks to a calamitous goalkeeping error from the Hammers’ Raphael Spriegel. Kristoffer Peterson, playing in a right-sided forward role, took a shot which was sent squirming past a hapless Spriegel by a deflection off of Jack Dunn. The Scouser will no doubt claim the goal.

That strike just prior to the break failed to ignite any real change of pace in the game at the start of the second half though, as both sides seemed to be playing within themselves. The Reds, however, began to control possession.

A heart-in-mouth moment came for Liverpool fans in the 68th minute when Mamadou Sakho felt his hamstring after making a strenuous sliding block. The Frenchman was replaced immediately by Rafa Paez, hopefully carrying just cramp.

Inglethorpe’s team doubled their lead in the 77th minute, this time with a goal of genuine quality. Jordan Lussey played a brilliant, defence-splitting pass from the centre of the pitch into the stride of Cameron Brannagan, and the England Under-18 international squared for Jack Dunn to grab his second of the night with an instinctive, close-range finish.

The exuberant Dunn was again involved ten minutes later, as he embarked on a mazy run before unleashing a fierce shot from 25 yards which was parried by Raphael Spriegel into the path of Kristoffer Peterson. The Swede dispatched emphatically into the roof of the net, but the goal was rightly ruled out for offside.

That proved to be the final piece of significant action, as Alex Inglethorpe’s young Reds got back on track after their disappointing loss on Monday.

Although youth football is about progression of talent rather than winning games at all cost, it’s worth noting that our Under-21s now sit second in the league, one point behind Fulham with a game in hand on the Cottagers. Significantly, the Reds have scored 42 goals in 15 matches: a record equally as impressive as our first-team’s this campaign. The development of our young talent is tangible and the Academy conveyor belt keeps on rolling.

Man of the Match: Jack Dunn