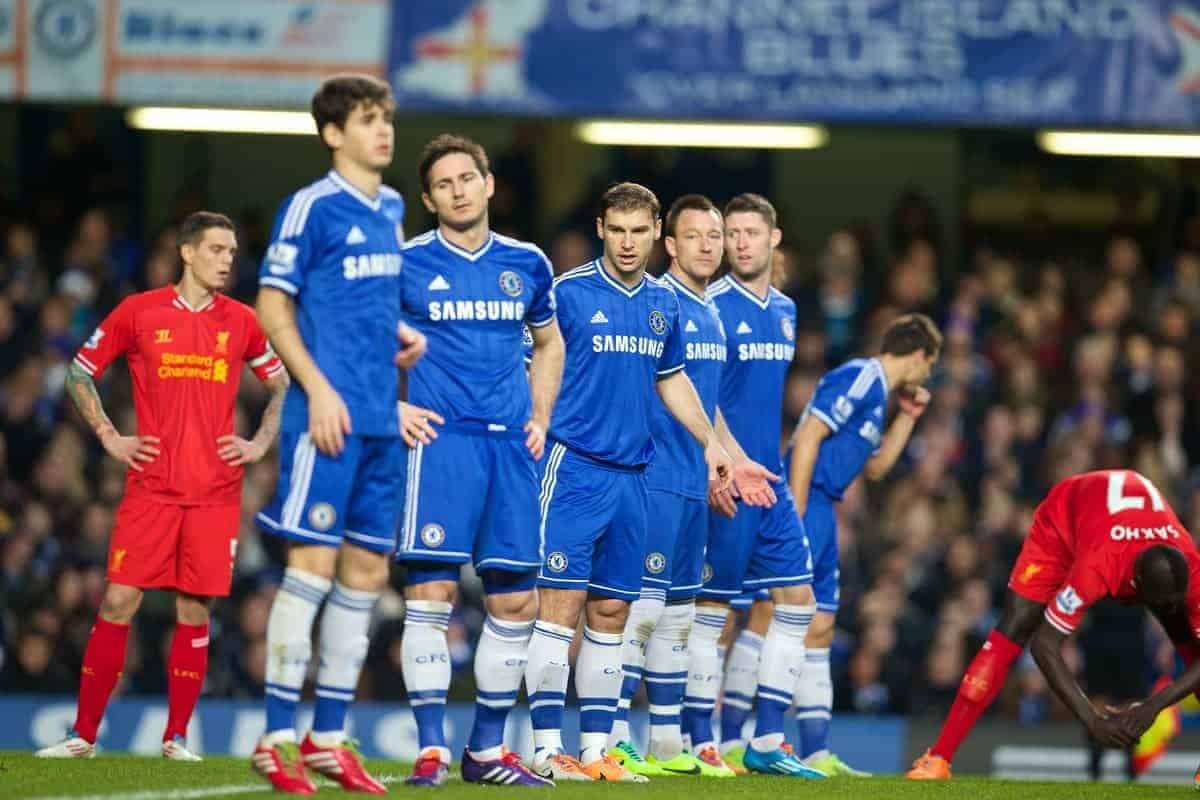 Before this weekend’s title fight against Chelsea at Anfield, Jack Lusby puts together a combined Liverpool/Chelsea XI.

In his latest Joyce-esque stream of consciousness waffle, Chelsea manager Jose Mourinho claimed that he will field a weakened team against Liverpool this Sunday in order to focus on reaching the Champions League final.

Whilst Anfield would gladly accept the likes of Hilario and Demba Ba lining up to contest the Premier League title this weekend, this is more than likely another of the Portuguese’s misfiring mind games.

But would it make any difference? How many of Chelsea’s stars would make it into the Liverpool first team on current form?

All stats used courtesy of Squawka.

In the battle of the shot-stoppers, at this juncture, there is no question that Chelsea’s elder statesman comes out on top. Whilst his powers may be waning Cech remains one of the best ‘keepers in the Premier League.

Unfortunately, Mignolet’s season has been blighted by a plethora of errors in judgment – generally in claiming balls in the box – and this is an area which will no doubt improve over time.

In 34 games this season Cech has kept 16 clean sheets, whereas Mignolet has contributed to 10 shut-outs in 35 appearances.

On Glen Johnson’s form this season, this competition doesn’t even run close.

The Englishman has been erratic to say the least and, whilst this can be explained to some extent by injury earlier this term, Liverpool’s right-back has struggled to achieve any kind of consistency.

Ivanovic represents a solid defensive option for Mourinho, and one of the club’s most consistent performers; this season, the Serbian international has averaged at seven defensive actions per game, has a 56 percent tackle success rate, and has helped his side at the other end of the pitch with three goals in 33 appearances.

Whilst Liverpool’s Slovakian centre-back remains a figure of derision amongst many Reds fans, the form of Skrtel this season – particularly at this most important of run-ins – is unavoidable.

His uncompromising style – typified by a phenomenal 402 clearances this season, the highest of any defender by far – has been complimented by a new-found confidence on the ball this season, with the

Chelsea’s Gary Cahill does put up a good argument for this position, and the Englishman has rarely put a foot wrong in the Blues’ defence this season, but Skrtel’s impressive goal tally just edges this contest.

Not a popular figure anywhere other than Stamford Bridge, that’s for sure, but Terry has been back to his imperious best this season.

Given the confidence of a returning Mourinho, the 33-year-old has put his off-field misgivings behind him and focussed fully on his performances on the pitch, contributing to 15 clean sheets.

Liverpool’s Mamadou Sakho misses out on this position due to a lack of game time, mostly, but Terry’s experience and defensive nous would – unfortunately – be a credit to any team at this moment in time.

In a bizarre turn of events this season, this position is being contended by two unnatural left-back options: Liverpool’s Jon Flanagan and our eventual winner Azpilicueta.

Flanagan, shifted to the left flank to accommodate for the return of Johnson – and a lack of quality elsewhere – has improved radically this term, but his gung-ho attitude occasionally lets him down.

Azpilicueta, with an impressive 54 percent tackle success rate, make this side due to his composure and consistency.

Chelsea’s defensive midfield options, namely Nemanja Matic, would give most others a run for their money, but in this contest the only winner can be Liverpool’s Captain Fantastic.

A drastic improvement in form this season coincided nicely with Liverpool’s title challenge, and his repositioning under Rodgers has given Gerrard a new lease of life at Anfield.

While Matic, Ramires and even David Luiz have their respectives qualities in abundance, omitting Gerrard would be criminal following his and Liverpool’s inspired surge post-December.

Liverpool fans in their droves sank, furious, following the club’s failure to sign Brazilian midfielder Willian last summer, with the ex-Shakhtar man ending up with Mourinho at Chelsea.

However, the rise of Sterling this season has put paid to any doubts over Liverpool’s transfer policy, and the Englishman keeps out such stars as Andre Schurrle and Willian in this XI.

Displaying a maturity beyond his 19 years, the winger has come into his own throughout Liverpool’s current 16-game unbeaten run in the Premier League, scoring six goals in 16 appearances from various positions across the midfield.

In perhaps the most closely contested position in this selection, Henderson just about edges Chelsea’s Brazilian Oscar here.

The development of Henderson under Rodgers has been phenomenal, as he has become one of the Reds’ key players.

Oscar started the season brightly as Mourinho’s choice No. 10, however after scoring five goals in his first 12 appearances the Brazilian has tailed off somewhat; whilst Henderson doesn’t run him close in terms of goals scored, his overall contribution is far more significant.

Batting away the advances of Philippe Coutinho, Hazard has been Chelsea’s standout attacking performer this season.

Now nearing the level that he attained at previous club Lille, Hazard has been inspired throughout 2013/14 for Mourinho, and he has rightly been credited with nominations for both the PFA Player and Young Player of the Year awards.

The Belgian has scored 14 goals and made seven assists in 33 appearances for the Blues this season.

Looking to, perhaps politely, rub his former employers nose in it this weekend will be England international Sturridge.

The 24-year-old was underused to such an extent by his successive Stamford Bridge managers – often shifted onto the wing to accommodate the fallacious abilities of Fernando Torres – that a move to Liverpool in January 2013 was considered last chance saloon.

Having scored 20 goals in 26 appearances for the Reds this season, Sturridge comfortably makes this XI over such luminaries as Demba Ba and the aforementioned Torres.

30 goals and 12 assists in 30 games says it all, Suarez is one of the very best players the Premier League has ever seen.

Torres and Samuel Eto’o in their very prime couldn’t hold a candle to the talents of Liverpool’s Uruguayan.

Do you agree with our selections? Let us know in the comments below.