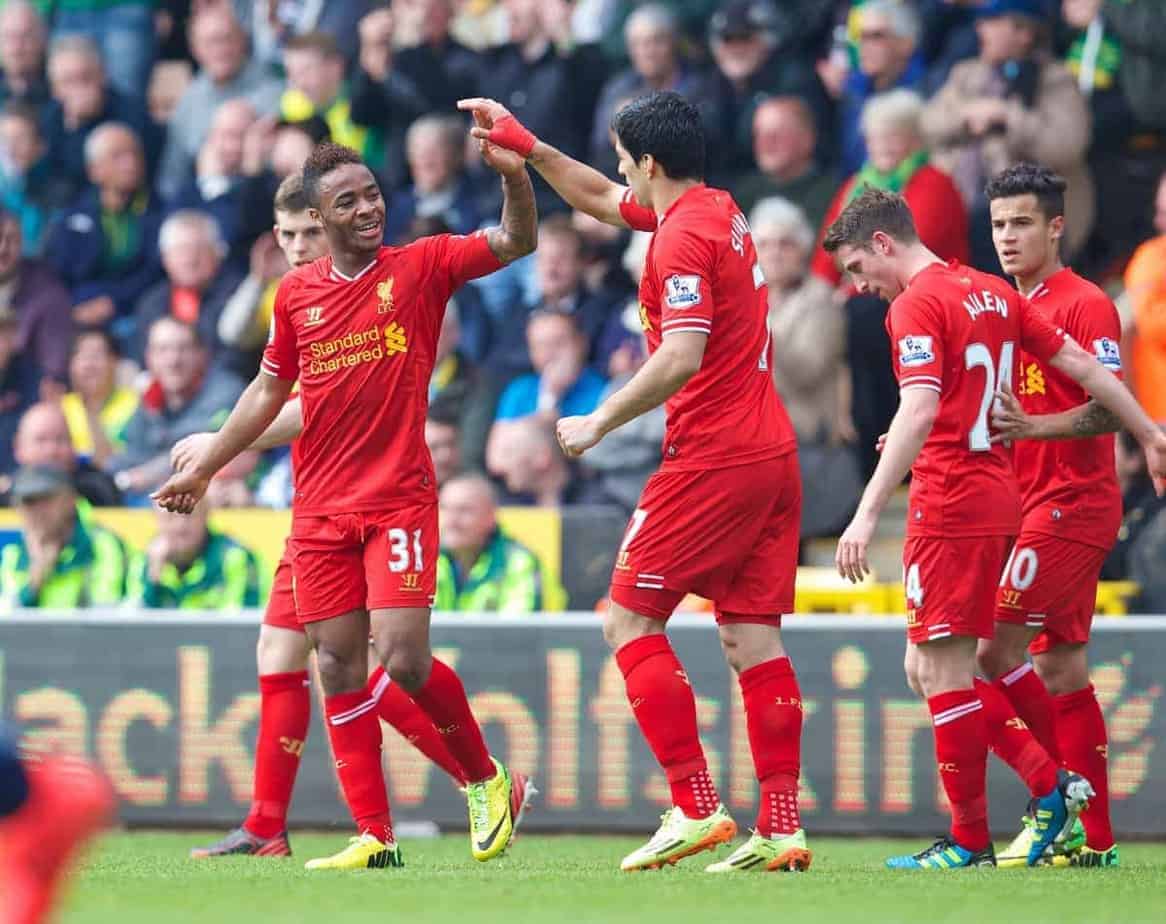 Liverpool held off a late Norwich City fightback at Carrow Road on Sunday afternoon to go five points clear at the top of the Premier League, with three games left to play.

Liverpool were looking to capitalise on a surprise Chelsea defeat at the hands of Sunderland on Saturday afternoon. The Reds’ on-loan striker Fabio Borini scored an 82nd minute winner for the Black Cats.

With Jordan Henderson suspended and Daniel Sturridge injured, as expected Brendan Rodgers brought in Joe Allen and Lucas Leiva to the team, with Raheem Sterling pushed up to support Luis Suarez up front.

The Reds started ferociously, going two up inside 11 minutes as relegation threatened Norwich.

Raheem Sterling sent a stunning strike from 25-yards out in for Liverpool’s first of the afternoon after just four minutes.

Suarez got on the end of Sterling’s low cross 7 minutes later to complete a 17-pass build-up and doubled Liverpool’s lead.

Liverpool’s concentration slipped slightly through the remainder of the first-half, but some heroic defending from Joe Allen kept Norwich at bay.

The title race is becoming a procession. It's like an open top bus ride through Premier League grounds #lfc

The home sides got a lifeline early in the second half when Simon Mignolet failed to deal with a simple cross and Gary Hooper smashed home from close range.

But Sterling soon restored Liverpool’s two-goal lead with a dazzling 60-yard run, finishing with a deflected shot that lifted over John Ruddy for the Reds’ third of the afternoon.

Norwich weren’t finished though and shockwaves were sent into Liverpool hearts when Robert Snodgrass, earlier booked for a horrific challenge on Allen, headed home on 77 minutes.

Daniel Agger came on for Allen to provide more assurances in central defence and Liverpool held on for a nervy finish to the game, but important nonetheless.

The job complete, Rodgers’ men take three points back to Merseyside with them.

Liverpool are now five points clear at the top of the Premier League from second place Chelsea, with three games to go. Third placed Manchester City sit nine points behind, with two games in hand.

For the optimists out there, if Man City drop points at West Brom on Monday night, and Liverpool beat Chelsea next Sunday, then the Reds would be champions if City fail to win at Palace, also next Sunday afternoon (4.10pm kick-off).