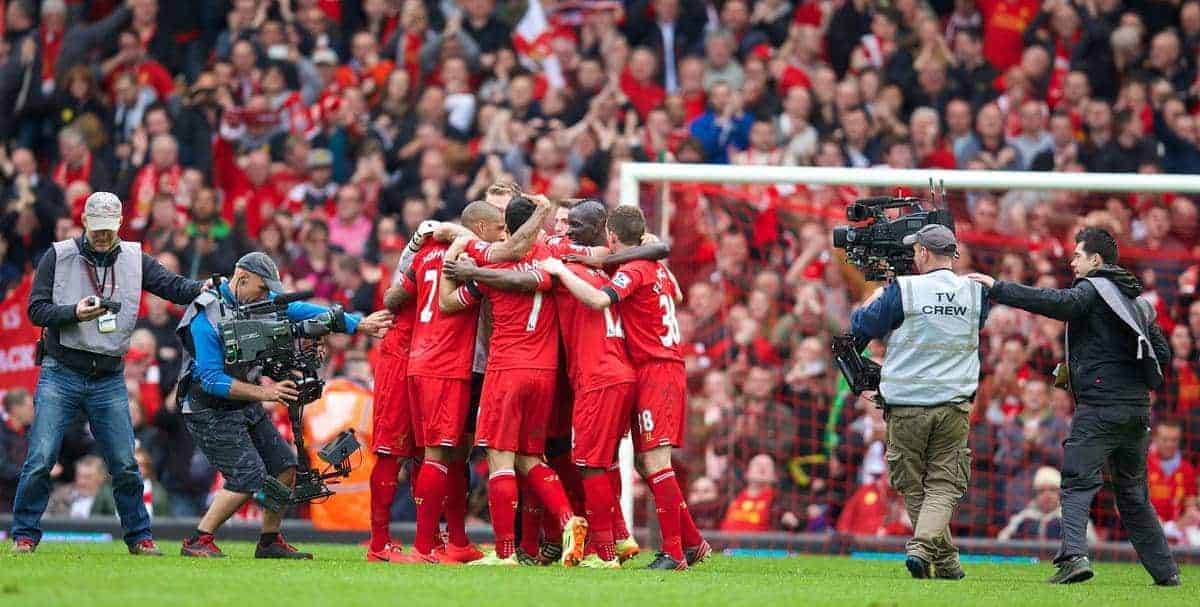 Oh what a wonderful day Sunday was to be a Liverpool fan.

The day was highly charged from start to finish. Feelings of anxiety and butterfly stomachs churned prior to kick-off and the minute’s silence for the 25th anniversary of the Hillsborough disaster was impeccably observed by both sets of supporters.

Then the Kop roared. Anfield roared. With a buzz in the area, Brendan Rodgers’ side faced their biggest test of character when David Silva and Glen Johnson’s own goal early in the second-half cancelled out Liverpool’s openers from Raheem Sterling and Martin Skrtel.

It was the resolve that Liverpool showed next to pick themselves up and go on to score a 78th minute winner thanks to the right-foot of Philippe Coutinho that sent L4 into euphoria.

Liverpool showed their title credentials on Sunday by beating one of their two title rivals. They could just maybe go all the way this season.

Steven Gerrard’s tears on full-time embodied the spirit and connection between everyone at the club this season, from the fans to the staff and players.

The Guardian‘s Daniel Taylor painted a picture of the battle scene of Anfield yesterday — valiant heroes in front of the crowd, so full of belief:

These are the moments when Liverpool, to borrow a line from the kaleidoscope of colours on the Kop’s banners, are making their supporters dream. When it really mattered, when the heat of the battle was dangerously close to intolerable, they found something extra just as it seemed everything was threatening to unravel. They played like champions and in the next few weeks that is feasibly what they will be.

As well as commenting on the “clichéd” but “incredible” Anfield atmosphere on Sunday afternoon, The Telegraph‘s Mark Ogden wrote about the matured performance of Raheem Sterling:

If Roy Hodgson needed to be persuaded that Raheem Sterling was worthy of a place in England’s World Cup squad, the Liverpool midfielder might just have been his seat on the plane with his performance here.
Sterling showed incredible composure to open the scoring in front of the Kop and then produced a display of maturity and discipline belying his nineteen years.

The teenager also headed one off the line to deny City in the first-half, capping an impressive performance.

Ian Ladyman of the Daily Mail took in the raw emotion of the day:

This was a remarkable day on Merseyside. The football was scintillating at times, played at lightning pace with sureness of touch. It went some way to proving subtlety and clever thought have not entirely been squeezed from our game. At full time, Steven Gerrard’s tears were understandable.

This was the loudest I've heard Anfield pic.twitter.com/v8b8TSOrgy

The players were also jubilant:

Long 90 minutes today but we got through because of great team spirit and everyone's support! #YNWA #4togo pic.twitter.com/nq0syPC62k

What a result!!! Great game of football! Another huge step closer #LFC

Great game from all the Team!!!! We fought hard to get this great win. Now thinking about the next game!!!! YNWA pic.twitter.com/DG8yoQK2qF

As were some famous ex-Reds:

The atmosphere at Anfield was as loud as I have ever heard it,Gerrard immense and showed why he's LFC's greatest ever, Sterling sublime #lfc

The fight continues away at Norwich next Sunday, 20th April. Let us know how the victory over Manchester City, and the overall occasion of the day made you feel in our comments section below.